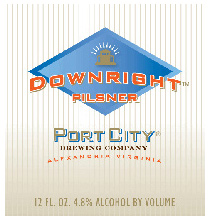 Crafted by Head Brewer Jonathan Reeves, this hand-crafted lager will be produced in the traditional Pilsner style, using authentic Pilsner malt and noble Saaz hops. The limited production Downright Pilsner is the fourth seasonal beer produced by Port City Brewing Company. Downright Pilsner will be sold at select retail, restaurants and bars in Washington, DC, Virginia, Maryland and North Carolina starting June 10, 2012. This beer will be in limited supply as Port City Brewing Company is only producing two 90-barrel batches with a suggested retail price for a six-pack of $11.99.

The 11,000 square-foot craft brewery is dedicated to bringing great quality, innovative, handmade craft beers to the DC and Mid Atlantic market. Port City produces world-class quality beer, brewing four year-round beers along with a rotating seasonal selection. The Downright Pilsner is a crisp, refreshing, and modern version of a traditional Pilsner, which will delight all summer long. This beer has 4.8% alcohol by volume and boasts a deep golden color and is medium bodied with a soft round malt profile and crisp, spicy, hop character on the finish. Downright Pilsner gets its carbonation completely naturally as its kept in the formation tanks for up to six weeks. A unique twist on this beer is the dry hop addition of Saaz hops during fermentation. This extra infusion of hops gives the beer a refreshing bite on the finish.