SAN MARCOS, CA – Award-winning craft brewery Port Brewing and The Lost Abbey today announced a new addition to its portfolio produced under the company’s Port Brewing label. Board Meeting Brown Ale, an imperial brown ale brewed with coffee and cocoa nibs, will join Port favorites Wipeout IPA, Shark Attack Imperial Red, Old Viscosity and Mongo Double IPA, as a year-round offering from the brewery in February 2013. It is the first new beer to be added to the Port Brewing regular line-up since Mongo’s release in early 2010.

“Between our Lost Abbey and Port Brewing labels we produce a really broad variety of beers; over three dozen in all,” said Port Brewing director of brewery operations, Tomme Arthur. “Interestingly, we’ve never produced a brown ale, so Board Meeting seemed a natural fit in our portfolio.” 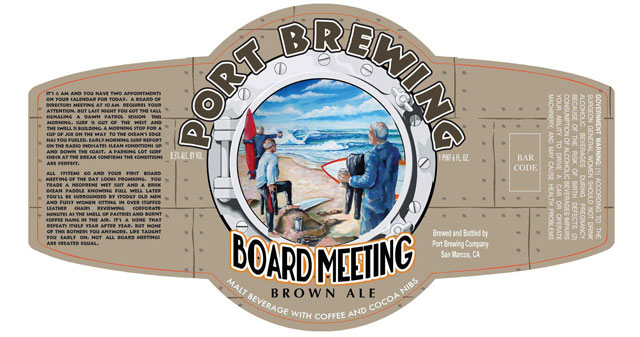 “Board Meeting offers the malty richness and assertive hop presence that you expect in an American brown ale, but enhanced with pronounced roasted coffee and bitter chocolate aromas and flavors,” Arthur said. “I think people will enjoy this beer by itself and at the table paired with meat dishes like pork, roasts and barbeque. I imagine it’d be pretty good washing down a sausage omelet at breakfast too.”

As with the other members of the Port Brewing year-round portfolio, Board Meeting brown ale will be available in 22 ounce bottles and on draft throughout the brewery’s distribution network. Consumers should expect to see it on tap in draft houses and on retailer’s shelves by mid February 2013.

Founded in 2006, Port Brewing and The Lost Abbey produces an extensive line-up of continental and American-inspired ales and lagers. Under the direction of legendary brewmaster and co-founder Tomme Arthur, the brewery has garnered dozens of awards in its six year history including the 2007 Great American Beer Festival Small Brewery of the Year, and 2008 World Beer Cup Champion Small Brewery. The company’s beers, many of which are aged in oak barrels for 12 months or longer, are universally recognized for their complexity, unique flavors, and bold, boundary-pushing styles. For more information, contact Port Brewing / The Lost Abbey at 155 Mata Way, Suite 104, San Marcos, CA 92069, telephone (800) 918-6816, and on the web at www.lostabbey.com.