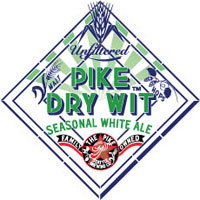 SEATTLE, WA. – Alice Waters, representing the Good Food Awards, presented Pike Brewing Company with an award for Dry Wit, wheat beer seasoned with spices and herbs, at the first annual Good Food Awards Ceremony which took place in San Francisco on January 14, 2011. Because Pike Dry Wit is our summer seasonal beer, we are announcing this award along with its release.

How is it Brewed:

Pike Dry Wit begins with a mixture of 68% organic two row pale malt and 25% organic malted and
unmalted wheat, in addition to a small amount of Belgian aromatic and Carastan malts. The cereal is cracked and lifted to the grist case in a bucket elevator where it begins its descent by gravity into the mash ton and then into the 900+ gallon, steam-heated brew kettle, where two pounds of Nuggets hops are added at the beginning of the boil and five pounds of Cascade hops are added in the last 20 minutes of the 75 minute wort boil.

One floor below, in the brewery itself, the wort is cooled to 71 degrees and centrifuged. In the whirlpool an infusion of dried orange peel, coriander, chamomile, and organic lavender from Pelindaba Lavender Farms, San Juan Island, Washington, are added in order to give additional character and flavor to the golden-colored elixir. Fermentation takes place at 71 degrees with a strain of yeast that originated at a Trappist Monastery in Belgium.

Because Dry Wit is unfiltered, it is slightly turbid in the glass, looking like spun gold when held to the light. The nose is spicy and slightly sweet though the beer finishes dry. The Pike Pub garnishes pints with a thin slice of orange; Dry Wit is a beer for sunny skies, light meals, like salads and cold soups.It is also beautiful with its garnish as a standalone beverage; as refreshing and delicious and wholesome liquid spiced-bread.

The Pike Brewing Company was founded by Charles and Rose Ann Finkel in 1989 and initially brewed British style beers like Pike Pale, IPA, XXXXX Stout and Kilt Lifter Scotch Ale. The Finkels sold Pike in 1997 and bought it back eight years later. According to Charles, who began marketing craft beer in 1978 and was the first to introduce Belgium beers in America.

“When we sold the company, Belgian beers and Belgian-style beers brewed by American Craft breweries were only a moderate success. By the time we reacquired Pike, they were a phenomena.”

Pike obtained proper yeast and began brewing these normally higher alcohol, slightly sweeter styles. Tandem Double and Monks Uncle Tripel were the first to be brewed and are now an important part of the brewery’s offerings. “People love the fruity flavor of these beers, but they are quite strong,” according to Rose Ann Finkel. For summertime drinking we were interested in creating a beer that had these rich flavor characteristics but was lower in alcohol. Pike Dry Wit was born in 2010.

The History of Wit Beer:

Wit is the Dutch word for white, or wheat, seasoned with available fresh and dried herbs and spices. Since the Low Countries were seafarers and traders, orange peel from Italy and Spain, coriander from India, and locally grown chamomile were used. Pike uses traditional spices along with organic Washington State lavender to add complexity to the subtle seasoning. In The Middle Ages, Wit was one of the most popular styles. By the 1980s, the style had become extinct until Pierre Celis, a milkman from Hoegaarden, Belgium, who remembered how wonderful this taste was from his youth, resurrected an old brewery and introduced the style to incredible acclaim. “Pierre Celis was a friend and mentor. We are proud to carry on the tradition that he started,” says Charles.

The Good Food Awards were created through a collaboration of food producers, farmers, food journalists and independent grocers organized by Seedling Projects. This team nominated judges from across the country to select the 71 winners from among seven categories, including beer, charcuterie, cheese, chocolate, coffee, pickles, and preserves. Nine beers were chosen by six beer judges. Winners were honored in a special ceremony hosted by Alice Waters in San Francisco.

According to The Good Food Awards, “For a long time, certifications for responsible food production and awards for superior taste have remained distinct; one honors social and environmental responsibility, while the other celebrates flavor. The Good Food Awards recognize that truly good food, the kind that brings people together and builds strong, healthy communities, contains all of these ingredients. We take a comprehensive view, honoring people who make food that is delicious, respectful of the environment, and connected to communities and cultural traditions.”