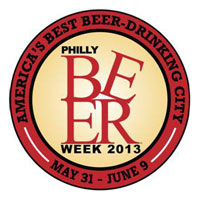 PHILADELPHIA, PA — On Saturday, January 12 from 1 p.m. until 3 p.m., Philly Beer Week (PBW) 2013 will host their annual Win a Trip to Belgium Raffle at Field House (1150 Filbert Street, 215-629-1520). Guests will have the opportunity to purchase raffle tickets for $5 per ticket or 5 for $20, and at 2:30 p.m., a drawing will be held to determine the winner. That local beer lover will then be invited to choose a brewery from among a list of PBW participants and will travel, along with the representative from their brewery of choice, to Belgium in March 2013 to partner with Bernard Leboucq and Yvan De Baets of Brasserie de la Senne in crafting the 2013 PBW Collaborative Brew.

“Our annual trip to Belgium is one of the high-water marks of the pre-PBW season, and we look forward to another great turn-out for this exciting event,” says PBW Executive Director Don Russell. “This is a once-in-a-lifetime opportunity, both for the lucky winner and for the brewer they choose to accompany them, and every year we look forward to offering them this chance — and to reaping the delicious benefits when we unveil their special beer at Opening Tap.”

The PBW 2013 Collaborative Brew will be created in cooperation with Brasserie de la Senne and imported by Shelton Brothers, who will provide the winner’s and brewer’s airline tickets and hotel rooms for the two-night whirlwind expedition. This year’s participating breweries and representatives are:

At the raffle event, guests will have the chance to mix and mingle with the brewers, who must be present in order to be selected to join the winner overseas. The Field House will serve their all-new menu of beer-friendly pub fare, along with their 40 local draughts, many from participating breweries.

Philly Beer Week 2013 will be held from Friday, May 31 until Sunday, June 9. PBW is a 10-day celebration of “America’s Best Beer-Drinking City,” and kicks off on the first Friday in June annually. Established in 2008, it’s the largest beer celebration of its kind in the United States, featuring hundreds of festivals, dinners, tours, pub crawls, tastings and meet-the-brewer nights throughout greater Philadelphia. PBW highlights the region’s diverse beer scene — its world-class breweries, neighborhood taverns, trend-setting restaurants and rich beer culture and history.

The Brasserie de la Senne first fired up its brew kettle in Autumn of 2010, thus becoming Brussels’ second brewery. Brewers Yvan De Baets and Bernard Leboucq are Brussels natives who believe that beer should be made slowly and carefully with the finest raw materials, unfiltered and unpasteurized, and free of any additives. Their mission is to honor age-old brewing traditions while adding just a few tasteful modern touches. Their award-winning creations recall a great era of Belgian brewing when beer was simultaneously characterful and refreshing, and brewers did not fear to throw that extra armful of fresh hops into the boil.

With an abundance of quixotic passion, but very little business sense, Shelton Brothers Importers brought its first shipment of beer — a load of uncompromisingly sour lambic from the Brasserie Cantillon in Brusssels — to the U.S. in 1996. American beer lovers were not quite ready to embrace it at the time. Since then, the Brothers have learned an awful lot while mostly holding to their convictions, ruffled a few feathers here and there, and watched their portfolio of imports grow to include beer and cider from some of the best small makers throughout the world. Meanwhile, Cantillon’s precious brew has become one of the most sought-after prizes in Beerdom, and sour beer is all the rage.