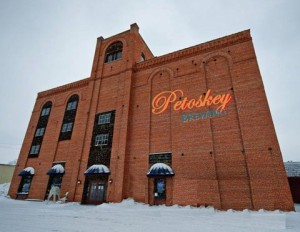 Petoskey, MI — Petoskey Brewing Company will add two additional brews to their can line-up this summer. Hopsessed Double I.P.A. and Sparkle American Lager will be available in June to existing markets in the 16oz./ 4-pack format.

Its bitterness is slightly mellowed with caramel flavors imparted by the copious quantities of malted barley utilized for this brew. Hopsessed will be a limited-production seasonal offering. Sparkle American Lager is our homage to the original Sparkle brewed by the Petoskey Brewing Company from 1898 until 1915. Wheat and four special malts combine with three different types of hops. Like the original, Sparkle is made from pure artesian spring water to create a super-clean easy drinking beer. Sparkle will be available year-around.

Petoskey Brewing Company is located on the shores of Lake Michigan in the beautiful northern Michigan town of Petoskey. The brewery opened in the fall of 2012 and occupies the old Petoskey Brewing Company’s building that was originally completed in 1898. The brewery is on pace to produce in excess of 3500 barrels of beer in 2014 and is distributed in keg and 16 oz. cans in the northern lower peninsula and eastern upper peninsula of Michigan. www.petoskeybrewing.com