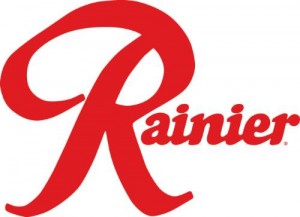 SEATTLE, WA — Last night, thousands of Seattleites gathered at the Old Rainier Brewery in the city’s Industrial District to celebrate the return of a beloved icon, the Rainier R. The original R sign came off the building 13 years ago and can now be seen at Seattle’s Museum of History and Industry (MOHAI).

Partygoers played games, drank cans of Rainier and watched a video containing time-lapse footage of the new R’s construction interspersed with interviews of notable Seattleites (e.g. Linda Dershang, Dow Constantine and Renee Erickson) who told personal stories about Rainier beer and shared memories of the original R. Mayor Mike McGinn then led a ceremonial ribbon-cutting, which began the crane-hoisted ascent of the new R to the top of the old brewery. The nearly 1,100-pound sign, which contains 235 light bulbs on each side, was illuminated after a countdown and toast. The sign is being permanently welded into place today.

“We’re so proud to have been able to bring the R back to the Seattle skyline,” said Dan McHugh, chief marketing officer for Pabst Brewing Co., owner of Rainier. “The fact that so many people came to help us celebrate the sign’s restoration speaks to what this symbol means to the community.”

The original R sat perched on the brewery for nearly 50 years, lighting the Seattle sky and serving as a recognizable landmark to visitors and residents alike. Rainier worked with MOHAI and Seattle sign company Western Neon to produce an exact replica of the original R. The restoration project was paid for through a partnership between Rainier and Columbia Distributing. More information can be found at www.RestoreTheR.com.

About Rainier Beer
Rainier beer’s roots go back to 1878, 11 years before Washington became a state. By 1904, Rainier had become so popular that the Seattle Brewing and Malting Company—brewers of Rainier at the time—was the largest brewery west of the Mississippi. By 1912, it was the 6th largest brewery in the world. It is this fabled history that lives in each can, bottle and pint of Rainier beer today. In 1999, the Rainier brand and recipe were bought by Pabst Brewing. Rainier is still made with pure spring water, golden barley and Yakima Valley hops. It can be found in stores, restaurants and bars throughout the West.http://rainierbeer.com.

Drizly: Retailers To Stock RTDs and Craft Beer Over Hard Seltzer in 2022