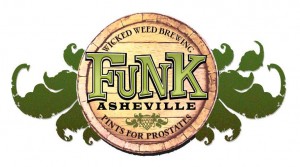 ASHEVILLE, N.C. — Wicked Weed Brewing and Pints for Prostates have announced a partial list of breweries scheduled to pour beers at Funk Asheville: A Gathering of Wild & Sour Beers.

The event will be held May 30 from 7-10 p.m. at the Wicked Weed Funkitorium, a new 12,000-square-foot barrel aging facility located at 147 Coxe Ave. The event is part of the 3rd Annual Asheville Beer WeekTM and will bring some of America’s top brewers of barrel-aged sour beers to the city.

Tickets for Funk Asheville are $80 with a $5 service charge via Etix. A very limited number VIP tickets offering one hour advance entry remain for Funk Asheville at $100 with a $5 service charge. The event includes beer samples, food provided by Wicked Weed, music, art and the opportunity to hang with the brewers. A total of 500 tickets will be sold to the public for the event, which will be held on the eve of the popular Beer City Festival. A silent auction benefiting Pints for Prostates will be held featuring unique beer experiences and collectible items.

Sour and wild beers embrace a wide range of historic brewing styles still popular today in Belgium, France and Germany, including lambic, Flanders red, gose, gueuze, Berliner weisse and saison. The use wild yeasts like, Brettanomyces, and bacteria, like Lactobacillus, add varying degrees of sour notes to the beer, which are often enhanced through barrel aging and bottle conditioning. American craft brewers have expanded the range of these beers to develop distinctive sour and Brett-style beers.

Funk Asheville is another reason for beer lovers to visit Asheville. It helps to anchor the final weekend of Asheville Beer Week with the Beer City Festival, making this one of the most exciting two days in craft beer in the United States.

Pints for Prostates reaches men through the universal language of beer to encourage them to take charge of their health. The group was founded by prostate cancer survivor and beer writer Rick Lyke in 2008. The grassroots effort raises awareness among men of the importance of prostate health screenings by making appearances at beer festivals, social networking and pro bono advertising. According to the National Cancer Institute, 233,000 American men will be diagnosed with the disease this year and 29,480 will die from prostate cancer. More information is available at www.pintsforprostates.org. Pints for Prostates also has a presence on Facebook, Instagram and Twitter (@pints4prostates).