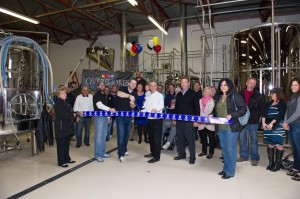 East Haven, CT – Overshores Brewing Co., Connecticut’s first and only dedicated Belgian style brewery celebrated the completion of its brewing facility in East Haven, Connecticut with a ribbon cutting ceremony on Friday April 4, 2014. The event as hosted in partnership with the East Haven Chamber of Commerce and was attended by East Haven Mayor Joe Maturo, local business leaders and community members.

Overshores beer has been long awaited by beer connoisseurs around state since the start-up debuted at the 2011 CPTV Craft Beer and Chili Challenge and stood out as the third place finisher in a field of over 70 breweries, including a number of true Belgian imports. In 2012, Overshores returned to the event and was awarded first place, beating over 85 other established breweries.

“We are so excited to be finally brewing here in East Haven. The town has been extremely welcoming and we’re looking forward to being a part of this great community,” said Christian Amport, founder and president of Overshores Brewing Co. “As the only Belgian style brewery in Connecticut, we look forward to getting our beer out to our fans that have supported us for so long as we got up and running.”

Overshores Brewing Co. will be open to the public for tours and beer tasting beginning this summer. For more information on Overshores’ product line, please visit www.overshores.com.