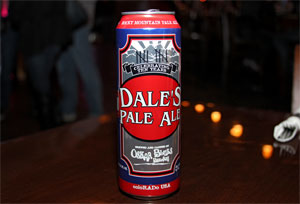 LONGMONT, CO. — Colorado-based Oskar Blues Brewery continues to build on its 52% growth in 2012 by posting 42% YTD increase through February 2013 and launching the state of Michigan in the first week of March. Michigan, known as a hop-savvy state, fits Oskar Blues’ hop-centric approach well represented by Dale’s Pale Ale, Deviant IPA, G’Knight Imperial Red IPA and the recently release seasonal (March to May) GUBNA Imperial IPA. The original craft brewery in-a-can is poised to reach 125,000 cases this year in Michigan and continue to open additional markets throughout 2013.

Oskar Blues’ continued growth is a result of a new Brevard, NC brewery and taproom that began providing fresh and local beer to Oskar Blues East Coast markets in January. The Brevard, NC can is pictured to the left. In addition to the Brevard, NC location the brewery invested $3.5 million in improvements to its Longmont, CO facility in 2012. Oskar Blues has grown to become the largest American craft brewery to package beer exclusively in cans, producing 85,750 barrels of beer in 2012, and is on pace for 128,000 barrels in 2013.

Founded by Dale Katechis in 1997 as a brewpub and grill, Oskar Blues Brewery launched its craft-brewed beer canning operations in 2002 in Lyons, Colo. Becoming the first American craft brewery to brew and can their beer. Today there are more than 200 craft breweries canning their beers. The original crew used a hand-canning line on a tabletop machine that sealed one can at a time. Oskar Blues Brewery in Longmont packaged 59,000 in 2011 and grew to 85,750 in 2012 while opening an additional brewery in Brevard, NC late in 2012.