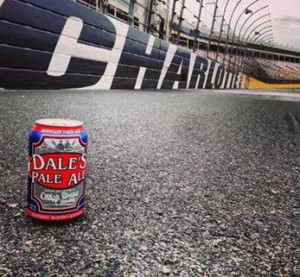 Brevard, N.C. — Oskar Blues Brewery is breaking boundaries once again by sponsoring driver Landon Cassill and his JD Motorsports with Gary Keller team in the NASCAR Nationwide Series. Cassill will pilot the No. 4 Oskar Blues Brewery Chevrolet at Charlotte Motor Speedway for the Dollar General 300 on Friday, October 11.

“It’s so cool to have a craft beer sponsor, especially Oskar Blues Brewery. Craft beer fits so well with our sport, which is casual and accessible,” says Cassill. “This feels like a great partnership because our team is a lot like this brewery—we’re a homegrown race team working really hard to break through.”

This partnership will be the first of its kind for the craft brewery industry, featuring Oskar Blues Brewery brands on the racecar and fire suit. The No.4 Oskar Blues Brewery Chevrolet Camaro will sport the colors of the brewery’s thirst-quenching All-American made beers in a can: Dale’s Pale Ale and Mama’s Little Yella Pils.

“Oskar Blues Brewery is built on following our passions, whether it’s putting beer in a can or being the first craft brewery to sponsor NASCAR. We love blazing our own trail,” says Neal Price, Head of Racing Development at Oskar Blues Brewery.

Oskar Blues, the first craft beer in racing, also currently sponsors a Super Late Model, a Mod Coupe and two Sprint Cars that compete at tracks across the country. In addition, Oskar Blues is an official track sponsor at Charlotte Motor Speedway.

Oskar Blues Founder Dale Katechis says: “We just like getting after it and being competitive. Whether it’s our complex and challenging beers, the aggressive mountain bikes our bike company makes, or going to the race trackÔÇªspeed is in our blood (www.reebcycles.com).”

Cassill, a 24-year-old from Cedar Rapids, Iowa, has several years of experience in the NASCAR Sprint Cup and NASCAR Nationwide Series (NNS). He has a best finish of third in the NNS.

Dale’s Pale Ale and Mama’s Little Yella Pils are the only craft beers available throughout Carolina Motor Speedway—at the Super Speedway, the Speedway Club, zMax Dragway and The Dirt Track, as well as The Party Box in the Fan Zone.

Founded by Dale Katechis in 1997 as a brewpub and grill, Oskar Blues Brewery launched its craft-brewed beer canning operations in 2002 in Lyons, Colo. It was the first American craft brewery to brew and can its beer. Today there are more than 200 craft breweries canning beer. The original crew used a hand-canning line on a tabletop machine that sealed one can at a time. Oskar Blues Brewery in Longmont packaged 59,000 in 2011 and grew to 85,750 barrels in 2012 while opening an additional brewery in Brevard, NC, in late 2012.

About J.D. Motorsports with Gary Keller:

JD Motorsports with Gary Keller is a two-car NASCAR team competing in the Nationwide Series with Mike Wallace in the No. 01 and Landon Cassill in the No. 4. The team, founded by NASCAR veteran Johnny Davis, has been operating since 2002 out of a state-of-the-art 40,000 sq. ft. shop in Gaffney, SC. More information can be found at www.teamjdmotorsports.com.