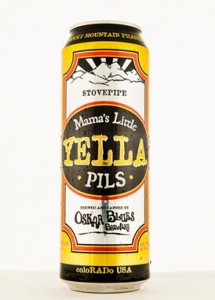 The new CAN will roll out at Oskar Blues events during the Craft Brewers Conference in Washington, DC, March 26-30, before heading out to beer lovers throughout the brewery’s 31-state distribution area in April.

Mama’s Little Yella Pils is Oskar Blues’ second offering in the single-serve can following the unveiling of Dale’s Pale Ale as the first American beer in that package during the 2012 Great American Beer Festival. The innovative stovepipe-sized Dale’s Pale Ale has experienced sales success at convenience stops such as QuikTrip in Arizona and Shell GoCo in Ohio while also being a natural fit in iconic music venues like Red Rocks Amphitheater and Denver’s historic Fillmore Auditorium, as well as with spring training baseball venues in Arizona.

“We’re in it to continue breaking boundaries of the craft-can package, taking it to places it hasn’t been before. Concert venues, sports stadiums and the outdoors are where we kicked this whole thing off in 2002, so the single serve stovepipe is a natural fit.” said Dale Katechis, founder of Oskar Blues.

Ball Corporation is the only can manufacturer in North America to make the Royal Pint, which is approximately the height of a 24-oz. can and the diameter of a 16-oz. can. Oskar Blues remains the only brewer (craft or otherwise) in North America who uses the unique 19.2 ounce single-serve can.

Get your hands on both the new 19.2 ounce Mama’s Little Yella Pils and Dale’s Pale Ale cans throughout the Craft Brewers Conference. We’ll be pouring and partying all over the place, including: