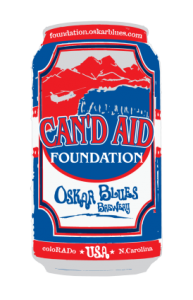 Longmont, CO.— Oskar Blues Brewery announced plans early this week to team up with nationally-touring bluegrass/high country band, The Infamous Stringdusters (http://thestringdusters.com/site/), to raise money for individuals, families, and small business affected by the flooding that washed through Colorado in September.

The Grammy-nominated band known for adding a philanthropic touch to their tours chose to partner up with the Oskar Blues CAN’d Aid Foundation (https://foundation.oskarblues.com/) for their upcoming Road To Boulder tour and Ski Tour to support a cause that hit close to home for members of the band.

Andy Hall, the band’s dobro player, is a resident of Lyons, CO—a town of just over 2,000 people that remained shut down for over a month due to damage (estimated at $1 billion) caused by the overflowing waters of the banks of the St. Vrain Creek. Hall recounts his decision to move to Boulder, CO over Charlottesville, VA in the first single the band has released in nearly two years, “The Road To Boulder”, featuring Bruce Hornsby on accordion. The single will be released as part of an EP that will also feature 3 other tracks recorded during the band’s live performance at the Bluegrass Underground. (Preview the EP at (https://soundcloud.com/warnerblaster/sets/road-to-boulder-ep-the/s-fJr5I.) Hall made the move from Nashville to Boulder, and in time, gravitated to the town of Lyons, a bluegrass mecca embedded in the Front Range of Colorado. It was in Lyons that Hall recalls The Infamous Stringdusters playing one of their first gigs at a small venue in the middle of the small town. In time—the band’s popularity skyrocketed, and The Infamous Stringdusters became a household name and fixture in the bluegrass circuit.

To help a community that embraced the ‘Dusters music from the beginning, the band has committed to donate $1 from every ticket sold to their December Road To Boulder tour and their February Ski Tour to the CAN’d Aid Foundation’s Colorado Flood Relief Fund. (For a list of tour dates: http://thestringdusters.com/site/tour-dates/.) The fund was created by Oskar Blues Brewery to help support the damaged communities in which the original Oskar Blues Grill & Brew location and the brewery’s 35,000 square foot brewery are located in. To date—the CAN’d Aid Foundation’s Colorado Flood Relief Fund has raised over $250,000 and distributed over $200,000 to flood victims and small businesses along that Front Range that sustained loss as a result of the flood.

The band will also donate all proceeds from sales of the single “The Road To Boulder” to the CAN’d Aid Foundation.

Fans of both Oskar Blues Brewery and The Infamous Stringdusters will have the opportunity to raise a glass together during pre-show events hosted by the brewery at venues along the tour. Updates on Oskar Blues & ‘Duster pre-show events can be found at:https://www.facebook.com/OskarBluesCANS.

Founded by Dale Katechis in 1997 as a brewpub and grill, Oskar Blues Brewery launched its beer canning operations in 2002 in Lyons, ColoRADo. It was the first American craft brewery to brew and hand-can its beer. Today there are more than 250 craft breweries canning beer. The original crew used a hand-canning line on a tabletop machine that sealed one can at a time. Oskar Blues Brewery in Longmont packaged 59,000 bbls in 2011 and grew to 85,750 bbls. in 2012. The brewery also opened a facility in Brevard, North Carolina, in December 2012.