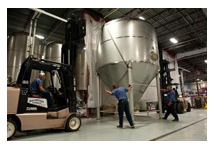 LONGMONT, CO – Colorado-based Oskar Blues Brewery, the first craft brewery in the country to put craft beer in a can in November 2002, continued its explosive growth posting a 53 percent increase in revenue and 47 percent increase in depletions in its established markets over the past six months, outpacing industry growth by nearly 40 percent.

This follows seven years of consecutive double digit growth which catapulted Oskar Blues to one of the three “Biggest Momentum Gainers” on the Brewers Association annual Top 50 Craft Brewers List this past spring and grabbed them the Denver Business Journal’s “Fastest Growing Private Companies” in August.

Oskar Blues’ continued growth is a result of $3.5 million in improvements to its Longmont, CO facility in 2012, which has allowed the company to expand distribution to new markets including Chicago (set for August 20) and founder Dale Katechis’ home state of Alabama (in July). Oskar Blues has grown to become the largest American craft brewery to package beer exclusively in cans, producing 59,000 barrels of beer in 2011, and is on pace for 90,000 barrels in 2012.

The most recent Longmont, CO improvements include 14 additional 200-barrel fermenters and two 400-barrel bright beer tanks. A new canning line capable of filling 300 cans per minute and 16oz. cans of Deviant Dale’s IPA has added to the revenue and volume increases.

Oskar Blues will also begin brewing at its new Brevard, NC brewery and taproom in December 2012, which will include a separate restaurant and live music venue in the small town as well. The addition of the 30,000 sq. foot Brevard brewery will expand its brewing capacity to nearly 140,000 barrels in 2013. In addition, the Tasty Weasel taproom in Longmont, CO underwent extensive renovations earlier in 2012 resulting in a new patio and additional production space.

“We have worked hard to accomplish a helluva lot in the first half of 2012 with our Longmont and North Carolina expansions; we continue to have as much fun as we CAN to enjoy this ride”. said Katechis. “I am proud of our team as we approach the 10th anniversary of Dale’s Pale Ale and we look to include Pisgah, NC singletrack as part of the Oskar Blues backyard.”

Founded by Dale Katechis in 1997 as a brewpub and grill, Oskar Blues Brewery launched their craft-brewed beer canning operations in 2002 in Lyons, Colo. They were the first American craft brewery to can their beer. Today there are more than 180 craft breweries canning their beers. The original crew used a hand-canning line on a tabletop machine that sealed one can at a time. Oskar Blues Brewery in Longmont packaged 41,000 barrels in 2010 and grew to 59,000 in 2011. Visit www.oskarblues.com for more information.