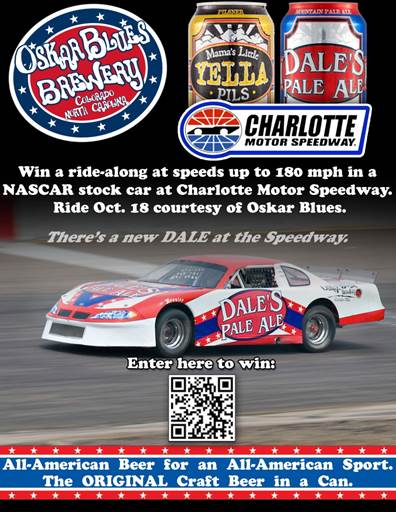 LONGMONT, Colo. — Want a chance to ride in a NASCAR stock car on the famed Charlotte Motor Speedway? Enter to win a thrilling once-in-a-lifetime ride-along adventure on October 18, 2013, courtesy of Oskar Blues Brewery.

Oskar Blues and Charlotte Motor Speedway teamed up for the first time this past spring for Speed Week, and Oskar Blues will be back at the Speedway for the October 10-12r ace weekend, including the Bank of America 500.

The brewery’s thirst-quenching all-American made beers, Dale’s Pale Ale and Mama’s Little Yella Pils, again will be the only craft beers available at the Oskar Blues Party Box —as well as at the Super Speedway, the Speedway Club, zMax Dragway and The Dirt Track. Cause craft beer and fast cars go together like moonshiners and lonesome ridge roads.

Oskar Blues Brewery’s Super Late Model race car has been having a RAD season with Trey Gibson at the wheel in the Southeast. Trey has three wins and two second-place finishes in his last five races. Colorado Mod Coupe driver #95 Cris Muhler has won six races this year. The Dale’s Pale Ale & Mama’s Little Yella Pils sprint cars have won three features and a handful of heat races on dirt tracks around Wisconsin.

America’s first hand-canned craft beers have been winding their way down from the mountains to the track from the Oskar Blues Brewery in Brevard to Charlotte all season.

“It’s been a blast bringing craft beer to the amazing fans of NASCAR,” says Neal Price, the man behind the Oskar Blues race car program, who will be slinging the Oskar Blues beer luv all weekend at Charlotte Motor Speedway in October.

“We are so excited to welcome Oskar Blues here. As a facility, this ensures we deliver the best products and experience for our fans, and Oskar Blues provides that,” says Brandy Mills, CMS business development director.

OB Founder Dale Katechis says: “It’s only natural to bring America’s original hometown track together with America’s original craft beer in a can. We just like getting after it and being competitive. Whether it’s our complex and challenging beers, the aggressive mountain bikes our bike company makes, or going to the race trackÔÇªspeed is in our blood.”

If you’re a race fan, here’s your chance to win a ride-along in a NASCAR stock car, and enjoy a CAN of Oskar Blues Brewery’s cold refreshing voluminously-hopped Dale’s Pale Ale or crisp gold medal winner Mama’s Little Yella Pils at the races.

Since opening in 1960, Charlotte Motor Speedway has established itself as The Greatest Place to See the Race, offering a lifetime of memories for race fans around the world. This year, the Speedway will host three NASCAR Sprint Cup Series events and be open for more than 100 event days.