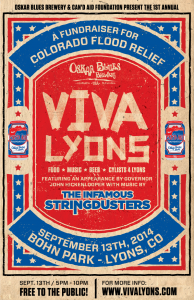 LYONS, COLORADO — The first annual VIVA LYONS will take place on Saturday, September 13 starting at 5PM in Bohn Park. Presented by Oskar Blues Brewery and featuring a special performance by Grammy-nominated bluegrass-rock band The Infamous Stringdusters, VIVA LYONS will be an event of remembrance, marking the one-year anniversary of the devastating floods that caused great damage throughout the Colorado Front Range, and celebration, saluting the resilience and rebuilding efforts of hard-hit towns like Lyons.

As many communities are still recovering from the widespread flooding that took place in the early fall of 2013, Colorado Governor John Hickenlooper has declared September 13 as a statewide day of service. Colorado United Day will bring together volunteers from all over the state for a dedicated workday that continues ongoing disaster relief efforts in many communities. At the end of the day, Governor Hickenlooper will address the crowd at VIVA LYONS, as the culminating event to this united statewide effort.

Produced in conjunction with the Town of Lyons, Cyclists 4 Lyons and the Office of Governor Hickenlooper, VIVA LYONS will become an annual celebration for Front Range communities to come together and mark a new beginning.

Founded as a brewpub by Dale Katechis in 1997, Oskar Blues Brewery launched the original craft beer-in-a-can with Dale’s Pale Ale in 2002 using a tabletop machine that sealed one can at a time. In 2008, the makers of the top-selling pale ale in ColoRADo moved into a 35,000-square-foot facility in Longmont, ColoRADo. The brewery has since experienced explosive growth-packaging 59,000 barrels of beer in 2011 and 86,750 barrels in 2012. In December of 2012, Oskar Blues opened the doors to an additional brewery in Brevard, North Carolina. Together, the breweries packaged nearly 120,000 barrels of beer in 2013, distributing its trailblazing craft brews to 35 U.S. states.

The Oskar Blues CAN’d Aid Foundation was formed as an immediate response to the massive flooding that devastated our hometowns of Lyons & Longmont, CO, in September 2013. To date, CAN’d Aid has donated $700,000 for flood recovery and an additional $50,000 to charitable causes focused on outdoor rec, child & family advocacy and sustainability initiatives. Shakin’ things up in the world of non-profits, the public charity features funky, fractured, grassroots grants to fund worthy projects from coast to coast. By putting our own spin on what charitable giving looks like, we’re able to stay nimble, respond quickly and stay true to our roots. Every dollar raised by the CAN’d Aid Foundation is matched by Oskar Blues Brewery-doubling the “do-goodery” and maximizing the reach.

About The Infamous Stringdusters