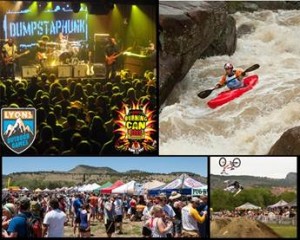 LYONS, Colo. — The Oskar Blues Burning Can Beer Fest (www.burningcan.com ) is back (June 1st) for the second year as part of the Lyons Outdoor Games (5/31 to 6/2) to bring you everything craft beer in a CAN offers: fresh, earth-friendly beer in a portable container that takes you to your next soul-saving outdoor adventure.

Oskar Blues Brewery invites all beer lovers to celebrate the REVOLUTION of big-flavored craft beers served up in cans in their hometown of Lyons, CO. Set amidst the backdrop of beautiful Rocky Mountain National Park in Bohn Park on June 1st, 2013, Burning Can adds a national craft beer influence to the world class events of the Lyons Outdoor Games (May 31st to June 2nd). www.lyonsoutdoorgames.com

Last year Burning Can Beer Fest joined Lyons Outdoor Games and raised $18,000 for beneficiaries while exposing over 2,300 people to canned craft beer, some of which is not for sale in Colorado. Burning Can offers samples (4pm to 7pm, VIP 3pm to 7pm) of canned craft beer from 35+ innovative canning craft breweries from across the country in the middle of live music by Chain Station (www.chainstationmountainmusic.com), food trucks, Lyons Outdoor Games 5K, Rugby, and the BMX/Mountain Bike dirt-jump & best trick bike competition (followed by DJ Chronz) as world class kayakers are running the river.

The Lyons Outdoor Games kick off Friday Night (May 31st) with a FREE live concert featuring New Orleans Dumpstaphunk (www.dumpstaphunk.com) and local band Interstate Stash Express set to the backdrop of Bohn Park. Now in its 12th year, the multi-sport competition of Lyons Outdoor Games has grown into a world-class celebration of mountain sports drawing heavy hitters from the outdoor industry over three days from May 31st to June 2nd.

“The Lyons Outdoor Games attract world-class athletes but also offer many opportunities for beginner and intermediate athletes to learn and develop skills under the downhome, grassroots feel of Lyons, CO.” says Dave Cosgrove, Lyons Park and Recreation Director. The South Saint Vrain creek is the definition of steep, manky, roadside class V+ for boaters in Colorado and has become the stage for the renowned Adam Barron Memorial Creek race.

What would a CANNED beer festival at an outdoor-sports celebration be without RECYCLING? Ball Corporation, Novelis Inc. and Alcoa Inc. have stepped up to focus on recycling initiatives. All money raised from Lyons Outdoor Games recycled cans will be donated to American Whitewater. American Whitewater is a national non-profit organization with a mission “to conserve and restore America’s whitewater resources and to enhance opportunities to enjoy them safely.” Canned craft beer has many benefits including defending beer from the damages of sunlight, an air-tight seal that allows less oxygen into the beer creating a fresher tasting beverage. Not only are cans good for the beer, they are also good for the environment. Aluminum cans are infinitely recyclable and are lighter to ship, reducing the ecological impact. Last, but not least, you can take CANNED beers where your next soul-saving adventure takes youÔÇª.including places where glass isn’t allowed and where you need to “pack it in, pack it out.”

All proceeds from the 2013 Burning Can event go to the Lyons Department of Parks and Recreation and the Colorado Brewers Guild, two groups that embody the soul of Oskar Blues. The Colorado Brewers Guild is a key player in the continued growth and celebration of Colorado’s craft beer industry. Lyons Outdoor Games is a tribute to the outdoor sports that helped inspire Oskar Blues to can Dale’s Pale Ale over ten years ago.

For a full list of events at the 2013 Lyons Outdoor Games visit: www.lyonsoutdoorgames.com. Tickets are $25 in advance, $30 day of for 4pm to 7pm event. $35 VIP Tickets are available for an early 3pm entrance and come with a commemorative Burning Can glass, no day of purchase available. Receive $5 off of the day-of ticket price if you ride your bike to the festival as Bicycle Longmont will be providing bike valet. Tickets are available at: www.burningcan.com

LODGING – There is ample camping at Bohn Park and Meadow Park in Lyons and More information about lodging is available at http://lyonsoutdoorgames.com/camping/

SPONSORS of Burning Can Beer Festival are:

CANNING BREWERIES ATTENDING (Some not available in Colorado):

and yours truly, Oskar Blues.

Originally known as the Lyons Whitewater Festival, the Lyons Outdoor Games was created 12?years ago as a fund-raising vehicle for the Lyons Department of Parks, Recreation & Cultural Events. In addition to a full complement of world class kayaking, biking, fly fishing, chainsaw carving and even dog events, the 2013 Games will feature live music along with numerous clinics and exhibitions put on by some of the world’s most elite professional athletes.

CBG is a trade association dedicated to the Colorado craft brewing industry and facilitates educational beer activities in Colorado. The CBG sponsors a variety of beer events throughout the state each year designed to increase awareness and appreciation of Colorado brewed beer.

Founded in 1954, American Whitewater is a national non-profit organization with a mission “to conserve and restore America’s whitewater resources and to enhance opportunities to enjoy them safely.” American Whitewater is a membership organization representing a broad diversity of individual whitewater enthusiasts, river conservationists, and more than 100 local paddling club affiliates across America. The organization is the primary advocate for the preservation and protection of whitewater rivers throughout the United States, and connects the interests of human-powered recreational river users with ecological and science-based data to achieve the goals within its mission.

Human Movement, a local event management company, is partnering up with the Lyons Department of Parks & Recreation and Oskar Blues to present the 2012 Lyons Outdoor Games and the first ever inclusion of the Burning Can Beer Fest.