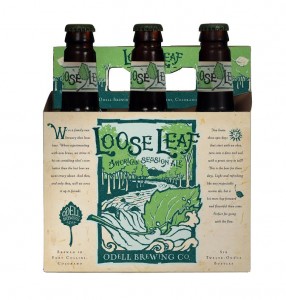 Fort Collins, CO — On April 7th, Odell Brewing will celebrate “Session Beer Day” with the release of its latest year round six pack offering, Loose Leaf American Session Ale. Loose Leaf debuted last year, as part of the brewery’s Montage Variety Pack. The beer was so well received, the brewery decided to release it in its own package this year.

“When we introduced Loose Leaf last year, the feedback was overwhelmingly positive,” said National Sales Manager, Kirk Simpson. “Many customers expressed how much they wished they could get more than just the three bottles in the Montage Variety Pack, so we listened!”

Recently named one of the best new beers of 2013 by Modern Brewery Age, Loose Leaf is lighter in color, lower in alcohol content, yet flavorful and distinct. The final recipe is crisp and balanced with lower IBU’s and a bright hop aroma. The name “Loose Leaf” is a nod to the loose, whole flower hops used in the hop back that give the beer its unique hop character. At 4.5% ABV, it’s delicate and refreshingly drinkable with a clean finish.

“Light and crisp, but with such good hop character,” said Pete Reid, Modern Brewery Age. “Gently hopped, but the hops are perfectly calibrated”

Odell Brewing will celebrate the release of Loose Leaf with a variety of events in all of its markets, and in the Tap Room on April 7th(Session Beer Day). Loose Leaf will be available in six packs year round throughout the brewery’s eleven state distribution footprint.

Founded in 1989, Odell Brewing was started by Doug Odell, his wife Wynne, and his sister Corkie. Twenty-four years later, the culture of family and collaboration still thrives fostering a brewery full of beer-centric people. It is this passion for beer that inspires Odell Brewing to create quality, hand-crafted, innovative brews. As a regional craft brewery, Odell Brewing is committed to serving the communities in which it distributes by minimizing its environmental impact, sourcing local raw materials, and through its charitable giving program known as Odell Outreach. Odell Brewing was named a “Best Company to Work For” in 2013 by ColoradoBiz Magazine and is an award winning brewery, nationally and internationally: 2013 Great American Beer Festival┬« – gold medal for 5 Barrel Pale Ale, 2012 Brewers Association Recognition Award, 2011 Great American Beer Festival┬« – gold medal for Friek, 2008 World Beer Cup┬« — gold for IPA. 2007 Great American Beer Festival┬« — gold medal for IPA.