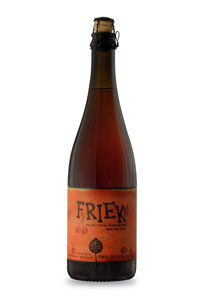 FORT COLLINS, CO – On November 10, 2012, Odell Brewing will release this year’s batch of Friek. The Kriek and Framboise hybrid returns for its third year.

“Friek is certainly one of the most highly anticipated offerings in our Cellar Series,” said Jason Bowser, tap room manager for Odell Brewing. “Both our guests and our co-workers look forward to this beer, especially during the holiday season.”

An adaptation of a Lambic style ale, Friek is aged in oak barrels with cherries grown on Colorado’s western slope. It is then blended with Colorado raspberries. The result marries a subtle cherry tartness with a hint of sweet raspberry and a crisp dry finish. The slightly sour profile is derived from a combination of wild yeasts, lactobacillus, and pediococcus and will increase over time.

Odell Brewing will celebrate the return of Friek with a tap room celebration on Saturday, November 10th. Guests can enjoy samples of the beer, tasty local fare, and live music by Gypsy Fit from 4 — 6 p.m. Friek will be available in 750 ml cork and cage finished bottles throughout the brewery’s ten state distribution footprint.