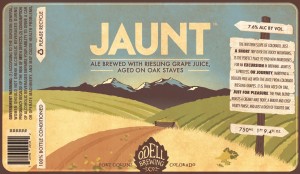 “We are fortunate enough to live in an agriculturally diverse state,” said Eli Kolodny, QA/QC manager for Odell Brewing. “This access that Colorado provides, allowed us to get locally sourced Riesling grapes from the Western Slope.”

Jaunt is an ale brewed with a healthy dose of wheat and Pilsner malts giving the beer body as well as a crisp finish to backbone. It is lightly hopped and fermented with the brewery’s house ale yeast. After primary fermentation, the beer was transferred into a stainless fermentor with light and medium toast oak staves suspended in it. At that point, the Riesling grape juice was blended in. The Riesling grapes add a distinct light tree fruit note and a delicate aroma of perfumed honeysuckle with a touch of acidity to the finish.

The beer matured on oak staves through secondary fermentation until it reached the target oak character with hints of light vanilla, almond, and stone fruit. Packaged on our 750mL line, Jaunt is 100% bottle conditioned and meant to be consumed fresh and cool.

About Odell Brewing: Founded in 1989, Odell Brewing was started by Doug Odell, his wife Wynne, and his sister Corkie. Today, the culture of family and collaboration still thrives fostering a brewery full of beer-centric people. It is this passion for beer that inspires Odell Brewing to create quality, hand-crafted, innovative brews. As a regional craft brewery, Odell Brewing is committed to serving the communities in which it distributes by minimizing its environmental impact, sourcing local raw materials, and through its charitable giving program known as Odell Outreach. Odell Brewing was named a “Best Company to Work For” in 2013 by ColoradoBiz Magazine and is an award winning brewery, nationally and internationally: 2014 World Beer Cup┬« – gold for Runoff, 2013 Great American Beer Festival┬« – gold medal for 5 Barrel Pale Ale, 2012 Brewers Association Recognition Award, 2011 Great American Beer Festival┬« – gold medal for Friek, 2008 World Beer Cup┬« — gold for IPA. 2007 Great American Beer Festival┬« — gold medal for IPA.