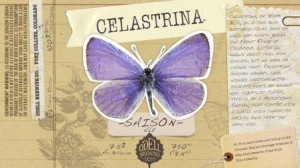 Fort Collins, CO. — On May 18th, 2013 Odell Brewing will introduce Celastrina Saison as part of its Cellar Series of beers. Celastrina is named for a rare butterfly found living on wild hops along the Front Range of Colorado and was brewed in honor of a partnership with the Colorado Natural Heritage Program.

“The hops blue butterfly (Celastrina humulus) is only found in a handful of counties along Colorado’s Front Range where it spends much of its time in moist drainages that support its host plant, wild hops (Humulus lupulus),” said Robert Schorr of the Colorado Natural Heritage Program, a non-profit organization of Colorado State University’s Warner College of Natural Resources. “CNHP and Odell Brewing Company have developed a novel partnership to conserve one of Colorado’s rare species.”

Last year, Schorr presented the hops blue butterfly to a group of Odell Brewing coworkers. After his presentation, the team felt compelled to share the story, and help the CNHP learn more. The partnership developed out of a mutual interest in conserving species and landscapes that are uniquely Colorado. Odell Brewing will donate $1 for hops blue butterfly research for every bottle sold.

Celastrina Saison is a crisp French-style Saison with hints of spice derived only from the hops used. Subtle phenols are complimented by the earthy hops and a dry finish. Odell Brewing and CNHP will celebrate the release of Celastrina in the brewery’s Tap Room during the weekend of May 18th.

The Colorado Natural Heritage Program (CNHP) is a non-profit organization of Colorado State University’s Warner College of Natural Resources and Department of Fish, Wildlife and Conservation Biology. For more than 30 years, CNHP has been collecting and analyzing data on rare species and habitats in Colorado, and providing information and expertise to promote conservation of Colorado’s biological resources. CNHP conducts biological inventories throughout Colorado and the West and provides data to private, state, and federal partners, where it can guide management and conservation of species and their habitats.

Founded in 1989, Odell Brewing was started by Doug Odell, his wife Wynne, and his sister Corkie. Twenty-four years later, the culture of family and collaboration still thrives fostering a brewery full of beer-centric people. It is this passion for beer that inspires Odell Brewing to create quality, hand-crafted, innovative brews. As a regional craft brewery, Odell Brewing is committed to serving the communities in which it distributes by sourcing local raw materials, and through its charitable giving program known as Odell Outreach. Odell Brewing was recently named a “Top Company of 2010” by ColoradoBiz Magazine and is an award winning brewery, nationally and internationally: 2012 Brewers Association Recognition Award, 2011 Great American Beer Festival┬« – gold medal for Friek. 2010 North American Beer Awards — gold medal for Woodcut No. 3. 2009 BrewNZ Awards — gold for 5 Barrel Pale Ale. 2008 World Beer Cup┬« — gold for IPA. 2007 Great American Beer Festival┬« — gold medal for IPA.