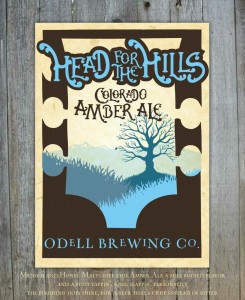 Denver, CO — Ft. Collins, Colorado mainstays Odell Brewing Company and Head for the Hills have collaborated on a special re-release of “Head for the Hills — Colorado Amber Ale.” The special draft release beer will be available at Head for the Hills’ New Year’s Eve performance on December 31st at the Aggie Theatre in Fort Collins, CO. Amanda Johnson-King, Odell’s Marketing & Branding Manager mentions, “We’re so excited about our partnership with Head for the Hills! Their music and our beer embody the Colorado spirit of adventure and camaraderie, and being able to combine the two is inspiring and fun!”


“It’s a dream to collaborate on a beer with Odell Brewing,” Mike Chappell from Head for the Hills shares. The pair initially came together earlier in 2013 to partner on the special beer in which the public voted on and selected the custom tap handle artwork, created by Odell. The two re-visited the concept in early December for hands-on brewing experience at Odell on the brewery’s pilot brewing system and brought a film crew to capture the day’s events. Brent Cordle, Odell’s Pilot Brew & Barrel Aging Manager comments “This collaboration beer is an Amber Ale with a hoppy attitude, dry hopped with American hop varieties giving the full bodied style, a big fruity aroma, a creamy white head and great mouth feel.”

About Head for the Hills: From Telluride Bluegrass Festival to SxSW and all points beyond — Head for the Hills creates a sound based in bluegrass that reaches into indie rock, jazz, hip hop, world and folk to stitch together fresh songs that bridge the divide between past and future acoustic music.

Beer to be served on NYE:
Head for the Hills

with special guests The Congress