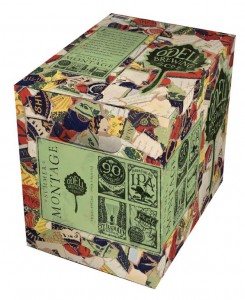 Inspired by its small-batch pilot system, the Roots Release series honors the brewery’s experimental brewing roots and allows folks beyond the tap room the chance to sample some of its favorites. The Perle hop shines in this latest Roots Release brew, a crisp white IPA. Hints of herbs and fruit mingle with the delicate wheat for a clean and bright finish that will leave drinkers smiling

“Perle White features both the traditional Oregon-grown Perle hop as well as a new public variety, the Triple Perle from Washington,” said Brendan McGivney, director of production. “Both hops provide a uniquely complex combination of fruit and spice balancing the wheat with subtle hints of pepper and stone fruit.”

The Summer Montage also features summer seasonal, St. Lupulin. An extra pale ale, St. Lupulin is dry-hopped with select hops, including Cascade and Centennial, giving the beer a bright citrus and floral aroma and flavor. The beer is affectionately named for a mystical legend who passionately tended to rows and rows of hops, caring for the coveted yellow resin within the hop cones known as Lupulin.

Perle White IPA will be available in the Summer Montage Variety Pack in select markets beginning April 22nd and on draft in May.