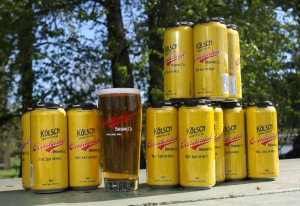 PORTLAND, OR – Occidental Brewing Co. announces the release of their beloved K├Âlsch in 16 ounce cans. Occidental’s K├Âlsch is a year-round favorite of Pacific Northwest beer drinkers for its crisp, clean flavor, smooth bitterness and balanced hop profile thanks to German Perle hops. Now, lovers of this deli┬¡cious session beer can pick up a four-pack of pint-size cans to enjoy at home, camping, or wherever else this newfound portability allows.

“Craft beer drinkers are over the stigma of canned beer,” says Dan Engler, brewmaster and co-owner of Occidental. “Pioneering small brewers have taken advantage of newer, small-scale canning tech┬¡nology and educated beer connoisseurs about the technical advantages of cans. Cans have a better seal than bottles, which keeps oxygen out and flavor in. Also, you’ll get no skunky beer in a can since they’re 100% light tight.” Dan adds that perceptions of metallic flavor in modern cans are a myth. “Cans are completely coated inside. No aluminum touches the beer.”

Beyond being great for the beer, cans are also great for the environment. “Aluminum cans can be recycled indefinitely, reducing the effect of bauxite mining and energy consumption associated with aluminum production,” Dan says. Furthermore, cans reduce energy consumption associated with transportation. “A 16 ounce can weighs less than 18 grams. Compare that to 295 grams for a 12 ounce bottle or over 360 grams for a 22 ounce bottle. Cans also pack more tightly.”

Occidental is distributed in the Portland area, Salem, and Southwest Washington by Maletis Bever┬¡age, Central Oregon, the Southern Willamette Valley, and the Central and Southern Oregon Coast by Bigfoot Beverages, and in British Columbia by Modern Malt.

Look for the familiar yellow design with the classic Occidental logo you’ve seen on our tap handles and find Occidental K├Âlsch in cans at select Fred Meyer, New Seasons and Whole Foods stores as well as area bottle shops and the brewery.