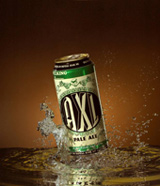 “We’re really excited at Hubert Distributors to support a local Oakland County brewer who’s making great beers and we’re ready to roll up our sleeves and work hard to help MillKing It Productions succeed,” said Tom Vella, president of Hubert, which has served as a beer distributor in Oakland County for decades. “Hubert strongly believes in supporting our community and local businesses like MIP brewery. They’re making exciting and terrific products and we want to help get those products to new markets and showcase the tremendous range of local Oakland County choices available to consumers when it comes to beer.”

“Our brewery is very happy to be working with Hubert Distributors and we foresee a great partnership going forward,” said Scott King, founder of MIP brewery. “As a new business, MIP brewery wants to make sure that we can focus on making the best beers around, and Hubert Distributors can focus on getting those beers to stores. Hubert has an extensive network, a fleet of trucks and excellent sales people along with more than a half-century of experience distributing quality products and services. This partnership is a win-win for both our businesses.”

A Clawson resident, King started dabbling in brewing his own craft beers as a University of Michigan student in the 1980s. King’s philosophy is to demystify craft beers and present his products in a straight-forward manner. A growing trend that MIP is tapping into: The brewer will use 16-ounce cans, not glass bottles. The reason: Light and oxygen are a beer’s worst enemy, King says. Plus, glass costs are going up, while cans are more transportable.

In 2010, MIP made 1,000 barrels of beer, or around 13,700 cases. Now, thanks to the new growth potential and strong distribution prospects both in Oakland County and beyond, MIP expects to boost annual output eight-fold, to 8,000 barrels, or nearly 110,000 cases. The expanded production is expected to generate more than $2 million in new revenue for MIP.

For Vella of Hubert Distributors, which employs 105 people, MIP’s potential is virtually limitless: “MIP brewery is a true bright spot in Michigan’s growing beer sector, and as a distributor, we are 100 percent committed to helping it succeed. Nearly every other day, we’re bringing new beer products to market, and that diversity and range of choice is what’s helping make Michigan the Great Beer State.”