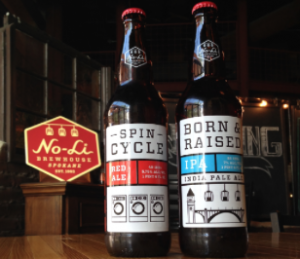 Spokane, WA – On May 9th and 10th No-Li Brewhouse, the small craft brewery providing the freshest Spokane-Style beers throughout the Northwest, will be one of 76 small and independent craft breweries represented at SAVOR: An American Craft Beer & Food Experience. Presented by the Brewers Association and in its seventh year, SAVOR is the premier beer and food pairing event in the U.S.

“SAVOR provides a world-class and unparalleled atmosphere where small and independent craft brewers showcase their flavorful beers alongside a menu of strategic pairings,” said Julia Herz, craft beer program director at the Brewers Association. “Attendees also have the unique opportunity of being personally served by the visionaries behind the brands.”

As in past years, each brewery will pour two of its craft beers, accompanied by a reception-style sampling of sweet and savory small plates designed by Brewers Association culinary consultant Adam Dulye, chef/owner of The Monk’s Kettle and The Abbot’s Cellar in San Francisco.

No-Li, back for its second year at SAVOR, continues to make internationally award-winning, small batch, Spokane-Style beers: beer made with ingredients sourced from within 300 miles of Spokane, by Spokane residents, in Spokane, thus creating a truly local, world-class product.

“We have an amazing source of water, the Rathdrum Aquifer, just miles from the brewery, malt sourced in Alberta, Canada, and some of the worlds best hops grown in our backyard, the beautiful Yakima Valley. Our proximity to these high quality, locally grown ingredients not only makes a better beer, but allows us to create a truly local product, lessen our carbon footprint, and support the local economy. It’s how we do it in Spokane — Spokane-Style!” says Co-owner John Bryant.

Visit the SAVOR website for more information on the event, including full menu and brewery list. Tickets to SAVOR are now sold out.