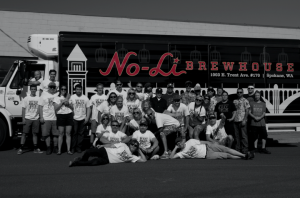 Spokane, WA — No-Li has made it clear that their priority is not only to expand the craft beer culture in Spokane, but to show their never-ending support for the community to which they belong. Over the last year alone, No-Li has used their platform to represent 15+ local, nonprofit organizations. With a combination of their staff, local craft beer enthusiasts and the community, they have managed to band together and raise over $21,000 for the city.

“We believe in our great city of Spokane and want to continue to feed a culture that gives back more than it takes,” says Akieba Stevens, No-Li Pub Manger.

“The fabric of our community is strengthened through our actions.  Everything we’ve done with the community up to this point is only a start.  Money is always needed to fund programs, but is also important to show support through building awareness and bringing together our community,” says No-Li Kitchen Manager, Matt Corra.

No-Li will continue to work hard in contributing to our local community and to be a part of shaping a culture of generosity for this great city!

Born & Raised in Washington’s Inland Empire, No-Li Brewhouse is an internationally award-winning brewery, crafting Spokane-Style beers with No Boundaries: innovative beers brewed with locally sourced ingredients. No-Li has won sixteen international awards, including a gold medal from the 2012 Great American Beer Festival.  For more information about the beers, brewery and the pub, visit www.nolibrewhouse.com, or follow them on Facebook/Twitter/Instagram @nolibrewhouse.