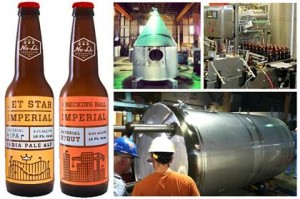 Despite a saturated craft beer market, No-Li Brewhouse continues to thrive on innovation in beer styles and bottle packages that serve a year-round customer experience. Continuous research and development and fast-paced growth drives a need for more production and packaging equipment, and increased capacity — the brewery is awaiting two 60-barrel fermenting tanks, one 60-barrel Brite beer tank, and a new 30-barrel brewhouse.

Master Brewer and Co-Owner, Mark Irvin comments: “Our current growth puts us on pace to produce nearly 6,000 barrels this year, up from 2400 barrels in 2012. With the addition of the new fermenters, a brite beer tank, and a new brewhouse, No-Li will have about 10,000 barrels per year capacity.”

Irvin states: “The new packaging configuration allows No-Li to meet customer demand for a smaller package size with exceptional value. The screen-printed 12oz bottle is unique within the industry.”

No-Li invites you to join them at the brewery in Spokane for a tour and tasting; samples of the new package available upon request.

Formerly known as Northern Lights Brewing Company, the brewery was renamed in April 2012 after co-founder/master brewer, Mark Irvin, and craft beer industry veteran, John Bryant, both with deep roots in Spokane, WA, forged a partnership. In addition to the state of Washington, No-Li is distributed in select states, including Idaho, Alaska, Colorado, Maryland, North Carolina, Washington, D.C., and Portland, OR. No-Li currently carries 22oz bottles and draft brands, and will add a 12-oz long-neck bottle 4-pack in November 2013.