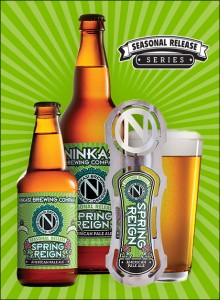 EUGENE, Ore.—Despite what Punxsutawney Phil says, Ninkasi Brewing Company is calling for an early spring with the return of its Seasonal Release Series beer, Spring Reign.

As a celebration of change year-round, Ninkasi’s Seasonal Release Series offers five exciting, yet familiar styles, available each for a limited time throughout the year. Brewed with quality ingredients, including water from Oregon’s own McKenzie River, Northwest hops, and regionally-sourced malt, each beer style captures the mood of the season and brings about change in each pint — and Spring Reign is no exception.

“This seasonal beer is a perfect transition into the spring months with a toasted malt profile that creates a dry finish, making the bright citrus and floral hops spring off the tongue,” describes Jamie Floyd, founding brewer and co-founder of Ninkasi.

The recipe for Spring Reign started being developed even before Ninkasi itself was born. When Biscuit malt was first introduced to the U.S., Floyd began experimenting with it, which developed into his first professional beer recipe. Based on that first recipes’ malt build and current hop varieties, Spring Reign was born and has been a returning Spring favorite of Ninkasi and its customers since 2009.

“Spring Reign has the same base grain bill [as the original recipe] but is a little bigger in alcohol and paired with different hops at a higher IBU,” says Floyd. “Sometimes simple is better and here is a great example.”

Available each year, Spring Reign returns to the shelves and draft, now through May.

Available: On draft, 12 and 22-ounce bottles

Description: A lightly toasted British-style malt flavor is balanced by bright Northwest-style hops. Spring forward with this refreshing seasonal ale. Notes of toasted malt up front, with a bright and crisp Northwest hop finish, it’s a session beer that everyone can enjoy!

Tasting Notes: Like many Ninkasi beers, this is an ale more than a specific style, though we put it in the Northwest Pale category. A light toasted malt flavor is more reminiscent of a British Pale, but the hops are bright and very Northwest. Flavorful and easy to drink!