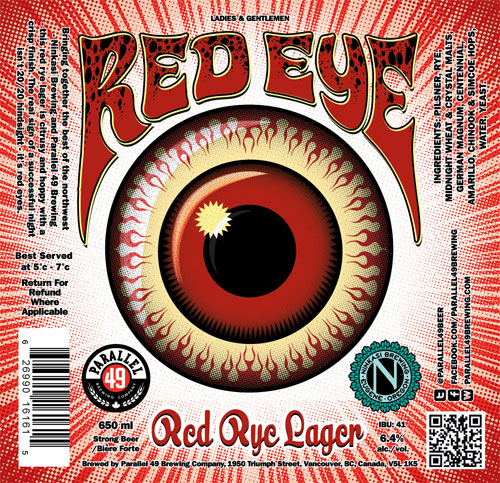 First meeting at the 2013 Craft Brewers Conference in Washington, D.C. this past March, founding brewers Graham With of Parallel 49 and Jamie Floyd of Ninkasi began talking, and, as the story goes, a collaboration was immediately born.

“We both possess the same mindset when it comes to our beer,” explains With. “Drinkable, hoppy West Coast beers are what we love.”

With two powerful brewing minds at work, With and Floyd landed on a red rye lager and began brewing during Vancouver Craft Beer Week in June at Parallel 49. “I’m a big fan of doing different takes on lagers, so we decided to do a hopped-up version,” says With.

“We had a great day brewing together, filled with laughter, learning about each other and our breweries,” explains Floyd. “The spirit of camaraderie in the craft beer industry really came through that day.”

The final result? A brew that is citrusy and hoppy with a crisp finish. And the name? Well, that was inspired by the real sign of a successful night. It isn’t 20/20 hindsight — it’s red eyes!

In 2008, three friends Mike, Nick and Anthony quit their day jobs and opened a restaurant that quickly became known as a mecca for craft beer enthusiasts in Vancouver. As the restaurant thrived, the three guys turned their attentions back to the enduring dream of opening their own brewery. They teamed up with Graham With, a respected home brewer, and Michael Tod, a friend with a wealth of sales experience in the industry. The newly assembled Parallel 49 team set out to create the unique brand of Vancouver craft beer that they had been thirsting after for years.