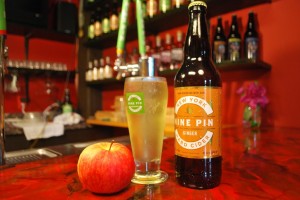 “Each style of cider that Nine Pin produces maintains the spirit of local apples while tying in what we believe are compelling varieties of flavor. Our Ginger cider represents an amazing balance between the apples and ginger that we’re proud to serve to the public,” said Alejandro del Peral, cider maker.

Nine Pin Ginger, according to del Peral, is a farmhouse blend of Capital Region and Hudson Valley apples that is fermented with white wine yeast and infused with ginger and orange peel. It is characteristically balanced, yet spicy. Ginger has an alcohol content level of 6.7 percent and each bottle contains 22 fl. oz. of cider.

Nine Pin Ginger is now available by the glass, growler and bottle at Nine Pin’s tasting room at 929 Broadway in Downtown Albany and will be available in retail locations starting the week of June 30.