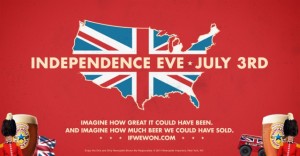 WHITE PLAINS, N.Y. — Every Independence Day, American beer companies festoon their cans with stars and stripes and exploit the nation’s strong sense of patriotism — not to mention the outcome of a 231-year-old war — to sell more beer. The makers of the famously British beer Newcastle Brown Ale think that’s bollocks, mostly because they’re British and they lost the war.

To get in on the holiday action, and to poke fun at rampant patriotic displays by American brewers, Newcastle Brown Ale has created Independence Eve, an American “holiday” designed specifically to sell British beer. On July 3rd, Newcastle is encouraging Americans to grab a Newcastle Brown Ale and toast to the country that nearly ran this one.

Newcastle will celebrate Independence Eve by exploring how great America could have been if Great Britain had won the Revolutionary War. The “If We Won” program, launching today, features 16 pieces of filmed content to help Newcastle celebrate the land that nearly became “Great Britain 2.”

The program includes several “alternate history” videos imagining how different America might have been if the Brits had won, tongue-in-cheek Revolutionary War re-re-enactments, and more. The series also features several film shorts starring a lineup of celebrity talent, including British actress Elizabeth Hurley; Stephen Merchant, Golden Globe-winning British actor and co-creator of “The Office”; and Zachary Quinto, an American actor best known for his roles in “Heroes,” “Star Trek” and “American Horror Story.” Each video will be made available at www.IfWeWon.com between now and the Independence Eve “holiday.” Fans can follow @Newcastle on Twitter (https://twitter.com/newcastle) and “like” Newcastle’s Facebook page (https://facebook.com/newcastle) for even more Independence Eve content.

“It’s not easy to sell a British beer during a supremely American holiday, so we’re imagining how great America could have been — and how much beer we could have sold — if the Brits had won the Revolutionary War,” said Quinn Kilbury, brand director for Newcastle Brown Ale. “In the late 1700s, colonial Americans risked life and limb to fight for their freedom. Today, we’re running the very real risk of people totally not getting the joke here, and we think that’s pretty patriotic.”

“If We Won” is the follow-up to Newcastle Brown Ale’s wildly popular, Cannes Lion Award-winning “If We Made It” Big Game program starring Anna Kendrick and Keyshawn Johnson.