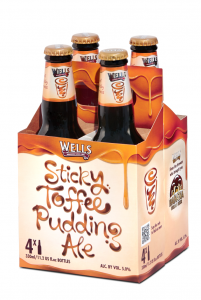 Created by the Master Brewers behind Banana Bread Beer and Double Chocolate Stout, Wells & Young’s new beer is based on the quintessentially British dessert Sticky Toffee Pudding. The 5% ABV beer is brewed using natural accredited mineral water and the finest ingredients to combine the rich flavours of Sticky Toffee Pudding with traditional ale to create an indulgent beer.

Karl Ottomar, Head Brewer at Wells & Young’s explains: “Our dessert ales have been a huge hit across the world and we wanted to add a new, unique flavour into the mix. Sticky Toffee Pudding Ale was a natural fit, combining a quintessentially British pudding with our brewing expertise to create a rich, smooth beer with all the warmth and aromas of a dessert but without being overly sweet.

“This is very much a beer first and a dessert second, it is brewed with our trusted pale ale malt and a secret blend of complex sugars. The initial sweetness of Sticky Toffee Pudding Ale is tempered by a gentle bitterness from two of England’s most traditional hop varieties- Fuggles and Goldings. This delivers the sweet taste of caramel and toffee along with a smooth and robust aftertaste”.

Wells & Young’s brewing expertise dates back to the 1870s when the Bedford-based brewery was founded. Sticky Toffee Pudding Ale joins an impressive line up of traditional ales from the brewery including McEwan’s, Bombardier and the Young’s beer range, and is now on sale in four pack 330ml bottles in the USA, and 500ml bottles in Canada.

Sticky Toffee Pudding Ale has been launched just in time for Christmas, which is perfect timing as it matches perfectly with all the festive favourites including roast chicken and pork, cheese and cranberries, and rich fruit cake.

More Than 80% of Craft Breweries Have Received Paycheck Prot...