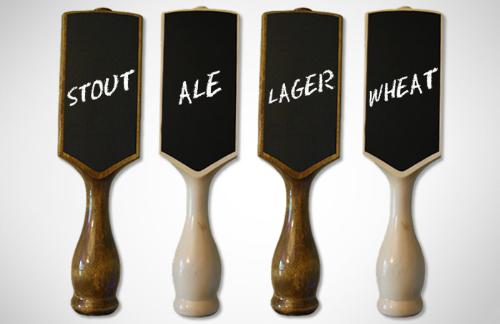 AUSTIN, Texas — The U.S. had over 300 new breweries open their doors in 2012, bringing new brews onto the craft beer scene and adding to the already booming industry. There’s no doubt that craft beer is becoming more popular and with that comes more beers in more bars and every keg of beer needs a tap handle.

The beer tap handle has been around since the 1800s. For nearly as long, adults have attempted to decipher what beer lies beneath lavish tap handle designs.

“The beer tap handle is a great marketing tool, but it often results in something closer to confusion than good marketing,” says Christian Lavender, founder of Kegerators.com and a craft beer advocate who hails from Austin, TX.

The chalkboard tap handle sits atop the beer faucet and allows the beer patron to easily read the beer’s name or type, resulting in a clear message. “The taps are very practical and have a nice appearance. They are reusable and allow the bar to quickly label brews without waiting for a matching handle to arrive. With the ever increasing seasonals and one-off brews being made, this definitely can help a bar label a beer that might not have a dedicated tap handle,” Lavender says.

The tap board’s magic comes from a dual faced chalkboard erasable surface that allows the bar to write in whatever they’ve got on tap. Here’s how they work:

“This is a great interchangeable tool for bars that have rotating or seasonal beers on tap,” says Jeremy McKnight, Manager at Republic National Distributing Company, “and it really saves commercial bars and home brewers a lot of money. Fewer branded tap handles have to be purchased in the end.”

Kegerators.com is a free online resource for consumers to search, compare, and buy kegerators online, featuring the largest selection of draft beer dispensers from the nation’s largest manufacturers. The searchable and easy-to-navigate website arranges kegerators by category, such as single tap, multiple tap, under counter, outdoor, home brew, mini and commercial kegerators. Consumers can also search for kegerators by type or by brand.