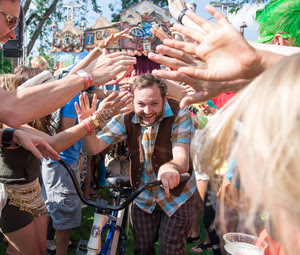 Fort Collins, Colo. — New Belgium Brewing today announced that Tour de Fat, its traveling tour of philanthropic bicycle advocacy, raised $625,716 for local nonprofits this season, totaling close to $4 million in its 15-year stretch. This year’s total is up more than $84,000 from last year. The event is free, yet all proceeds from beer and merchandise sales and donations from parade participants go to nonprofit organizations focused on making communities a better place to ride a bike.

Tour de Fat celebrates bicycle culture, kicking off each festival with a costumed bike parade through city streets. After the parade, thousands gather for a day of eclectic entertainment, New Belgium beer, bike-themed activities, delicious local food and much more. The events also encourage people to think twice about recycling, with most waste diverted from landfills at each stop of the tour.

Tour de Fat traveled to 10 cities between May and October this year, attracting a total of 103,500 beer and bike enthusiasts. New Belgium’s hometown of Fort Collins, Colo. raised the most money ($110,454), and had the most festival-goers, totaling 25,000 people. To see how each city performed, a breakdown is included below.

Tour de Fat also hosted the eighth annual car-for-bike swap, where one brave role model in each city stepped on stage to trade in car keys and pledge to live car-free for one year. Each swapper received a $2,250 stipend to buy their own commuter bike in exchange for their car. Vehicles for Charity auctioned the swapped cars, with proceeds benefitting Tour De Fat’s local nonprofit partners. Each of the swappers is encouraged to blog about their adventures as a two-wheeled local rock star. To read their tales from the road, visit the car-for-bike trade blog at http://trademycarforabike.tumblr.com/.

“This was our 15th year and record setting — raising more than $600,000 for some incredible nonprofits in the biking world,” said Matt Kowal, Tour De Fat Impresario. “This year three of the cities on the tour raised more than $100,000 each and we can’t thank everyone enough for joining us for a day of fun, while dressed as their alter-egos. This year was definitely one of the best yet. We look forward to seeing everyone again next year — ride on.”

To see photos, videos, and other highlights from some of the 2014 tour stops, visit https://www.facebook.com/TourDeFat. For more on New Belgium Brewing, go to http://www.newbelgium.com.

New Belgium Brewing, makers of Fat Tire Amber Ale and a host of Belgian-inspired beers, is recognized as one of Outside Magazine’s Best Places to Work and one of the Wall Street Journal’s Best Small Businesses. The 100% employee-owned brewery is a Platinum-level Bicycle Friendly Business as designated by the League of American Bicyclists, and one of World Blu’s most democratic U.S. businesses, and a Certified B Corp. In addition to Fat Tire, New Belgium brews nine year-round beers; Ranger IPA, Rampant Imperial IPA, Shift Pale Lager, Snapshot Wheat, Sunshine Wheat, 1554 Black Lager, Blue Paddle Pilsener, Abbey Belgian Ale and Trippel. Learn more at www.newbelgium.com.