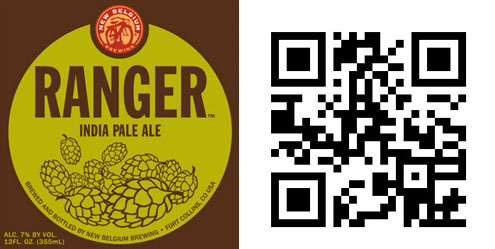 FT. COLLINS, CO — New Belgium Brewing’s new Ranger IPA 12-packs have a special feature, so before you recycle the packaging, make sure you scan it. The 12-packs now feature a QR (quick response) code, which allows users with a smartphone to get instant access to all things Ranger.

By scanning the two-dimensional code, found in two spots on the Ranger 12-packs and in national full-page New Belgium advertising, Ranger fans can follow their local New Belgium Ranger, learn about music, food and even book pairings that go with Ranger. There is a music video (hip-HOP, of course) featuring New Belgium Rangers for the truly committed. To scan the code, smartphone users will need to have a free QR app downloaded on their phone.

“Although we sometimes refer to smartphones as electro-leashes, they sure do make life easier and they can be pretty entertaining,” said New Belgium spokesperson, Bryan Simpson. “These QR codes are a great way for people to learn more about Ranger and New Belgium events happening near them. It’s so simple — just scan and, voil├á, Ranger comes to life.”

Ranger IPA is one of eight year-round beers produced by New Belgium Brewing. The India Pale Ale first joined the New Belgium portfolio in 2010, answering the call from Rangers (and their local beer drinkers) for something new and hoppy.

In 2010, Ranger was the fastest-growing new craft brand of the year and the second best-selling overall IPA. Simcoe, Chinook and Cascade hops lead off the beer, with Cascade added again for dry-hopping. Pale and dark caramel malts bring out the hop aroma and flavor from start to finish. Ranger IPA offers 70 IBUs and is 6.5 percent ABV.

Ranger IPA 12-packs retail for approximately $15.99 and are offered in most states where New Belgium is sold. If you would like to take a sneak peek at the Ranger site before scanning the QR code you can visit http://site.newbelgium-qr.g1.friend2friend.com/.

For more information on New Belgium Brewing check out www.newbelgium.com.