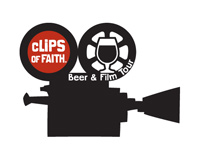 FORT COLLINS, CO — New Belgium Brewing, maker of Fat Tire Amber Ale, is bringing its Clips of Faith tour of homemade films and handmade beer back to Madison this Thursday, June 21 at Olin Park. Join us under the stars to have a great time and raise money for the Bicycle Federation of Wisconsin. Learn more at www.clipsoffaith.com.

Clips of Faith is an outdoor event that brings people together to view a free screening of collected amateur films, taste New Belgium’s Lips of Faith beers (http://www.newbelgium.com/beer), as well as popular classics, and enjoy food from local vendors. The event will also have a bike valet and the chance to win a New Belgium Cruiser Bike!

The Clips of Faith films embrace many genres, including comedic shorts, animation and environmental documentaries. Some of the selected films for the 2012 tour include: The Canning Queen of the Desert: Classie Parker, a tale about deep conversations in the kitchen; DamNation, highlighting the controversy over water rights in the west; and Foxy Shazam — Unstoppable, a film entirely created with old school theater trickery, puppeteering and black light.

Since its inception, Clips of Faith has raised more than $100,000 for local philanthropic organizations. Last year, the Madison stop had approximately 450 attendees and generated nearly $1,500 for the Bicycle Federation of Wisconsin, which is our partner again this year. The Bicycle Federation of Wisconsin is a statewide, nonprofit organization that works with people from all around the state to make bicycling convenient, safe, accessible and fun. Learn more at www.bfw.org.

Other tips:
Food is welcome; alcohol is not (leave that to us)
Bring low chairs or blankets — or lounge on the grass