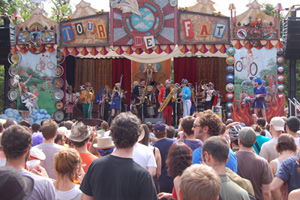 FORT COLLINS, CO. – New Belgium Brewing today announced that Tour de Fat, the one and only traveling bike carnival, raised more than $400,000 for local nonprofits during the 2011 season. This marks a 25 percent increase over last year. Tour de Fat is now close to breaking the $2 million mark in funds raised, with its grand total at more than $1.97 million after 12 seasons of cycling philanthropy.

In 2011, Tour de Fat traveled to 13 cities, attracting a total of 69,550 festival attendees and 41,150 parade cyclists (up 34 percent from 2010). In addition, the festival boasts an impressive 90 percent diversion of waste from landfills. Tour de Fat kicked off in Durham, NC on June 25 and wrapped up in Austin, TX on October 22. To see how your city performed compared to other cities along the tour, see the 2011 city-by-city breakdown below.

For the fifth year and deemed the pinnacle of the event, Tour de Fat hosted the car-for-bike swap. As part of the exchange, a volunteer in each of the 13 cities traded in his or her vehicle for a hand-built commuter bike and committed to living car-free for the next year. Denver’s trader, Erin Vanderberg, is actively writing a blog tracking her car-free lifestyle. You can follow her at http://365bike.wordpress.com/.

“Erin joins a committed group of swappers who all have tremendous stories to tell and we are proud and encouraged by them all,” added Simpson. Visit the Tour de Fat swappers’ blog at http://trademycarforabike.tumblr.com/.

For more information and to see videos from some of the 2011 tour stops, visit http://www.tour-de-fat.com. For more details on New Belgium Brewing, go to http://www.newbelgium.com/.