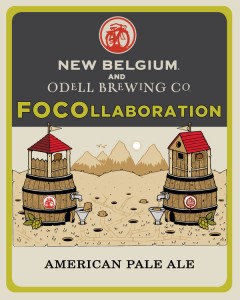 “Over the years we’ve shared everything from laughter, to beers, to perspective,” said New Belgium Brewing CEO, Kim Jordan. “FOCOllaboration celebrates that camaraderie and the mutual respect of being a couple of brewers who grew up together in the same neighborhood.”

Odell and New Belgium are located less than a mile apart in what has been affectionately called the Beermuda Triangle of Fort Collins Brewing.

“After working just down the street from each other for 23 years, it seemed the right time to brew something together,” said Odell co-founder, Wynne Odell. “Our collaboration beer combines our long term friendship with our collective creativity resulting in a delightful, neighborly brew.