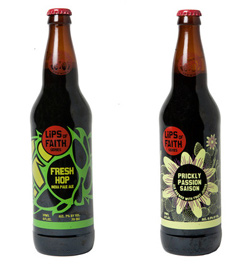 Fresh Hop packs a citrus punch of Amarillo, Centennial and Cascade hops, straight off the vine in Washington State. This brazen and deliciously bitter IPA pours deeply golden with the slight haze of a really hoppy beer. The array of hops gives a sharp blast, but the finish is light and dry. IBU: 70; ABV: 7%.

In a fruit medley of passion fruit and prickly pear, Prickly Passion Saison is New Belgium’s return to farmhouse ales. The fruit juices combine with the tropical esters of an earthy Saison yeast, creating a broad and reaching mango-like character. Deemed “ostentatiously amber,” this Lips selection is guaranteed to provoke the palate. ABV 8.5%.

“We opted not to make our fourth quarter Lips selections exceptionally wintery or heavy,” said New Belgium brewer Grady Hull. “Instead, we are hosting a hops harvest party and bringing uncommon fruit selections to the table, both of which sparkle with holiday flavor.”