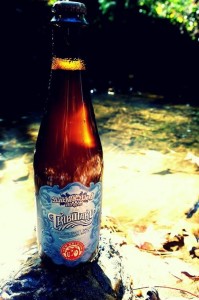 “We wanted to create an ale that truly represented both locations,” said Luke Dickinson, Head Brewer of Wicked Weed. “We used malt and water from both North Carolina and Colorado. We mixed yeasts from both breweries. We used sugar beets because the New Belgium facility in Fort Collins is located on a retired sugar beet farm. New Belgium is making a home in Asheville, and we wanted to welcome them here by brewing a beer that brought a little bit of Colorado to Asheville.”

“The local brewery scene in Asheville is so vibrant,” added Alex Dwoinen, New Belgium’s Asheville Brewing Manager, about the partnership. “We’re excited to be involved with Luke, Walt and their team with this collaboration. The experimentation they do never ceases to amaze me.”

WATER’S ROLE IN THE BREW

In addition to malt, yeast and beets, a few barrels of water were shipped from Colorado to Asheville to signify the coming together of two places, much like two tributaries feeding into one larger water source.

“Two smaller tributaries coming together make a stronger, larger, more beautiful river,“ said Abby Dickinson, Marketing and PR at Wicked Weed. “The same goes for craft beer. We are all a part of a larger community and when we can come together and support each other, we are a part of something more beautiful.”

A portion of proceeds from bottles sales will benefit the work of Western North Carolina Alliance’s French Broad Riverkeeper program.

“We’re very honored and excited to be the beneficiary of this amazing collaboration,” said French Broad Riverkeeper Hartwell Carson. “It means a lot for us to work with businesses that care as much as we do about the protection and preservation of our rivers.”

Tributary will be released at Wicked Weed’s Funkatorium, located at 147 Coxe Avenue, on November 15th at 2pm. Bottles will be available for sale across North Carolina the following week. For more information about the release: http://www.facebook.com/WickedWeedBrewing.

For more information about the Western North Carolina Alliance and the French Broad Riverkeeper please go to: www.wnca.org.

Wicked Weed Brewing is based in Asheville, North Carolina. Opened in December 2012, the original brewpub consistently hosts 25+ beers on tap including hop forward, West Coast style ales, open fermented Belgians, and barrel aged sour and wild beers. With the opening of the second location, The Funkatorium, in October 2013, Wicked Weed is striving to become the largest producer of barrel-aged beers in the Southeastern United States. Wicked Weed Brewing was awarded a gold medal for both 100% Brettanomyces Serenity in 2013 and Mompara Honey Ale in 2014 at the Great American Beer Festival. In addition to these beers, Wicked Weed is known for producing Freak of Nature Double IPA, Coolcumber Ale, Tyrant Double Red Ale, Hopburgular Citrus IPA, Black Angel Cherry Sour and Oblivion Sour Red. Most recently, Wicked Weed announced plans to open a 40,000 square foot production facility by fall 2015. Learn more at www.wickedweedbrewing.com and on Facebook at http://www.facebook.com/WickedWeedBrewing.

New Belgium Brewing, makers of Fat Tire Amber Ale and a host of Belgian-inspired beers, is recognized as one of Outside Magazine’s Best Places to Work and one of the Wall Street Journal’s Best Small Businesses. The 100% employee-owned brewery is opening their East Coast brewery in Asheville, NC by 2016, is a Platinum-level Bicycle Friendly Business as designated by the League of American Bicyclists, and one of World Blu’s most democratic U.S. businesses, and a Certified B Corp. In addition to Fat Tire, New Belgium brews eight year-round beers; Ranger IPA, Rampant Imperial IPA, Shift Pale Lager, Sunshine Wheat, 1554 Black Ale, Blue Paddle Pilsener, Abbey Belgian Ale and Trippel. Learn more at www.NewBelgium.com and www.NewBelgium.com/AshevilleBrewery.