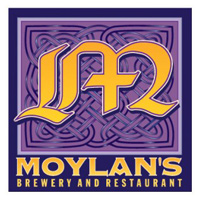 NOVATO, CA. — Moylan’s Brewery is pleased to announce the addition of new Brewmaster Derek Smith. Smith joins Moylan’s from Black Diamond Brewing Company in Concord, California, where he served as Brewmaster for the past 6 years and was instrumental in leading the brewery to a number of award-winning beers. Derek has a seasoned history of California brewing and has been a longtime friend and fan of Moylan’s Brewery.

Smith graduated from Texas A&M University with a degree in architecture. Upon graduating, Smith traveled abroad and took a job at the White Horse in London as a cellarman. The White Horse instilled in Smith a deep appreciation for great cask ales and Belgian beers. Six months abroad turned into a four-year odyssey of travel, scuba diving, and beer tasting. Smith bolstered his newly discovered passion for brewing by apprenticing at Two Rows Brewery followed by The Master Brewers Program at UC Davis. Since then, Smith has served as Brewmaster for Black Diamond Brewing Company, where he was well known for his creative and bold hop-centric IPAs, Belgian ales, and barrel-aged beers.

Founder Brendan Moylan is excited to have Smith onboard, commenting, “Derek is the perfect choice to take over the reigns here at Moylan’s Brewery. He is known in West Coast brewing circles for his passion and dedication to making great craft beer. We are excited to bring his expertise to Moylan’s and we believe Derek will play a vital role in shaping our brewery’s future.”

Smith is eager to bring his unique style and talents to the popular Novato brewery. “I am looking forward to sharing in Brendan’s vision of crafting quality beers at Moylan’sÔÇª” commented Smith, “and I am excited to be joining one of the strongest teams of innovative beer makers in the Bay Area.”