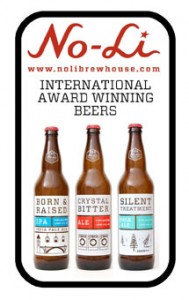 SPOKANE, WA – The ‘little brewery that could,” No-Li Brewhouse wins yet another round of medals, this time from the Brussels International Beer Challenge, adding to its list of accolades already awarded this year from Japan and the granddaddy of them all, the Great American Beer Festival.

Brew master Mark Irvin brews every batch of No-Li. Yes, he personally fires up the brew kettle each morning and is hands-on through each hop addition and dry-hopping. With nearly 50 years of combined brewery experience between co-founders Irvin and John Bryant, the team has earned sophomore brewery credentials in its freshman year.

No-Li continues to expand a world-class 30 barrel fermentation cellar that provides for continuous beer creativity and diversity. Success with customers allows the brew house to also serve its co-workers with eye on building quality compensation and benefits, and creating beer industry careers for countless folks.

Born & Raised is the No-Li spirit that has spread to Baltimore, Washington, D.C., Denver, Fort Collins, Seattle and Spokane. The brew house has plans to expand further on the East Coast to New York in spring 2013.