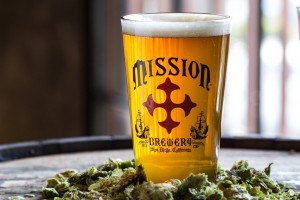 SAN DIEGO — Mission Brewery is proud to announce the release of their new premium IPA “Plunder,” adding to the award winning collection of beers they produce. The beer features 9 different hops, while being extremely well balanced and drinkable with a 7% ABV.

Plunder was first brewed in 2014 as a small batch beer, and returns as a welcome addition to Mission’s core lineup.

Mission Brewery’s Lead Brewer, Bobby Oliver states, “One of the most important characteristics you’ll discover is how balanced this beer is. It has a lot of aroma. There are huge notes of tropical fruit with resinous hints of mango, pineapple and grapefruit, then the malt backbone kicks in and really rounds out the beer.” He says that a lot of modern IPAs are astringent and can ‘punch you in the face’ with bitterness; Plunder is an exception to that.

“Plunder” presents itself as burnt amber in appearance with a bright white head that leaves lacing. Bobby enthusiastically states that, “it’s incredibly attractive in a glass and truly represents what a west coast IPA really is.”

Plunder was officially released to the public on May 1st, and will be introduced with a public launch party on May 13th. The beer will be available on draft and in 22 oz. bottles to start, followed in a few months by 12 oz. bottles.

Coinciding with the release of “Plunder” is the opening of Mission Brewery’s exciting new 5,429 sq. ft. Tasting Room and Private Party area. Uniquely designed, it features an entire wood wall 1,800 sq. feet in size – probably the largest hand wood-paneled wall in San Diego – and made with 100% reclaimed wood found in San Diego. This wall was constructed entirely by local craftsman Brandon Hubbard.

This inspiring space is a continuation of the historic Wonder Bread factory, embracing similar historic features of those in our current tasting room. The room spans two floors.

It also has a dramatic garage style floor-to-ceiling window opening upstairs that overlooks Petco Park. With their continued expansion and growth, Mission Brewery now has close to 10,000 sq. ft. total space for tasting and events.

Quickly becoming a desirable location for both private parties and events, Mission Brewery has already booked this artistic new space for weddings, corporate events, fantasy football draft events and company parties even before the official opening.

Mission Brewery was originally established in 1913 in San Diego. The brewery, like most breweries of the time, went out of business during the first year of Prohibition. In 2007, Dan Selis, an avid home brewer re-established the brand and eventually relocated the manufacturing and the tasting room to Downtown San Diego in the Historic Wonder Bread Building. The former commercial bakery is now a 26,000 square feet brewery with a projected output of 24,000 barrels for 2016, and has been brewing commercially for over nine years. With over 50 National and International awards, Mission is considered one of the top craft breweries in San Diego County.

For additional information, please call (619) 544-0555 or visit our website at missionbrewery.com.