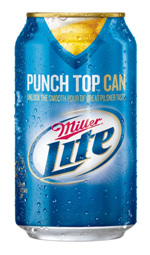 CHICAGO – Miller Lite is giving its cans a second tab for a smoother pour, and inviting beer drinkers to have fun opening it.

The Punch Top Can increases airflow, reducing glug and resulting in an improved, smoother pour that highlights the great pilsner taste of Miller Lite. The second tab on the Punch Top Can can be opened with a wide array of objects such as a house key, golf tee or even a dollar bill, for those who are especially clever. Simply set the can on a solid surface, place your chosen opener against the edge of the can and use leverage to open the second tab.

“Miller Lite is giving beer lovers an even more enjoyable drinking experience with the breakthrough Punch Top Can,” said Amy Breeze, director of innovation and activation for Miller Lite. “In our testing, consumers told us they prefer the Punch Top Can three-to-one over the standard beer can because it’s more like drinking from a pilsner glass. We’re proud of our product and think everyone will have a blast exploring different ways to open it.”

To support the Punch Top Can, the brand is launching new television commercials this week, which will run through mid-August on network and cable sports programming, as well as on cable entertainment. The spots tout the can’s benefits and inspire consumers to get creative with their own Punch Top Can opening tools. The product launch is also supported by print, radio, out-of-home and digital advertising, retail point-of-sale and public relations.

The Punch Top Can will be available in retail accounts across the country starting this week and will be the standard can for all Miller Lite and Miller Genuine Draft 12- and 16-ounce cans.

Built on a foundation of great beer brands and nearly 300 years of brewing heritage, MillerCoors continues the commitment of its founders to brew the highest quality beers. MillerCoors is the second-largest beer company in the United States, capturing nearly 30 percent of beer sales in the U.S. and Puerto Rico.

MillerCoors operates eight major breweries in the U.S., as well as the Leinenkugel’s craft brewery inChippewa Falls, Wisc., and two microbreweries, the Tenth Street Brewery in Milwaukee and the Blue Moon Brewing Company at Coors Field in Denver. The MillerCoors vision is to create the best beer company in America through great people changing the way America enjoys beer. MillerCoors builds its brands the right way through brewing quality, responsible marketing and sustainable environmental and community impact. MillerCoors is a joint venture of SABMiller plc and Molson Coors Brewing Company. Learn more at MillerCoors.com, at facebook.com/MillerCoors or on Twitter through @MillerCoors.