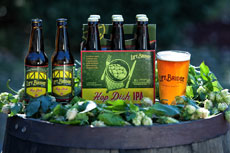 Lift Bridge Brewing Co was established in 2008 by a group of Stillwater guys dedicated to creating well-balanced beers that will help you slow down, relax, and appreciate life. Our tasty brews can be found at fine retail establishments throughout Minnesota and Western Wisconsin, as well as our own Brewery and Taproom at 1900 Tower Drive, Stillwater, MN.

Pabst Brewing Company Redefines Itself as an Enhanced Drinks Business