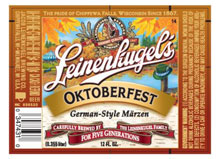 CHIPPEWA FALLS, WI — Leinenkugel’s is rolling out barrels of its seasonal Oktoberfest brew in time for crisp, cooler temperatures. Celebrating over a decade of brewing Oktoberfest, Leinenkugel’s is bringing the traditional German Marzen-style flavor to bottles and draft across the U.S., beginning now through October.

First introduced in 2001 to honor Jacob Leinenkugel, who came to the U.S. from Germany and began Leinenkugel’s in 1867, Leinenkugel’s Oktoberfest is brewed with Munich, Caramel and a blend of 2-row Pale malts. These barley malts give Leinie’s Oktoberfest a rich, hearty character and deep amber color, while four hop varieties provide an aromatic and smooth, well-balanced lager.

“Leinie’s Oktoberfest is an aromatic, smooth beer that enhances the flavors and aromas of the season,” said Jake Leinenkugel, president of the 145-year-old Jacob Leinenkugel Brewing Company. “Oktoberfest combines malty sweetness with carbonation and hop bitterness to cool down the intensity of spicy foods, a great experience to share with friends during the shorter days and longer evenings of the fall season.”

Available nationwide on draft and in six- and 12-pack bottles wherever Leinenkugel’s is sold, Leinenkugel’s Oktoberfest retails for approximately $6.99 — $7.49 a six-pack.