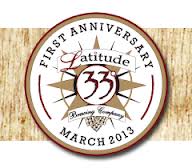 VISTA, CA — Latitude 33 Brewing Company announced today that it would release its anniversary beer, Latitude 33 Biere de Mars, at its first anniversary celebration on March 9, 2013. The Biere de Mars, French for “March Beer,” is a farmhouse beer originally brewed in March or early spring in Northern France as well as some areas of Southern Germany and Belgium. Latitude 33?s nod to this fresh, malt-dominated style is spiced with five pounds of coriander and clocks in at 7.4% alcohol by volume.

“We wanted to brew something unique to celebrate our anniversary, but it’s not as easy as you might think in a craft beer market like San Diego County,” said Latitude 33 head brewer Kevin Buckley. The Biere de Mars had special appeal because it’s both unusual style and traditionally brewed to begin a new season.”

the god Mars approves of Biere de MarsConsidered a sibling to the Biere de Garde and close cousin of the Saison, the Biere de Mars is lighter and dryer than its relatives, dominated by toasty malt and earthy fruit flavors. In a nod to Germany’s spring Bock beers, Latitude 33?s Biere de Mars takes a slight twist with a touch of chocolate malts for body and color, and an addition of five pounds of coriander for spicy aromatics and flavors. The result is a well-balanced beer with notes of sweet malt, dry fruit and spices in the nose and on the tongue, followed by a clean, dry finish.

“It’s a great beer consumed fresh as the style was intended, but we think it’s going to cellar really well too,” Buckley said. “We’re looking forward to sending some of this to the wine barrels in our new 33 Rare program and seeing what happens.”

The Latitude 33 Biere de Mars makes its debut on tap in the Latitude 33 tasting room at the brewery’s anniversary party this Saturday, March 9, 2013. It will be released to distribution and should be available on draft throughout San Diego County and select locations in the greater Southern California area beginning the week of March 18.