Amazon is taking to-go beer to the next level. The e-commerce goliath is planning to sell beer and wine at Amazon Go, the cashier-free, brick-and-mortar convenience store scheduled to open on the ground floor of its Seattle office tower in the first half of this year. And, according to Recode, an employee will still check IDs to confirm shoppers buying alcohol are of legal drinking age.

“When we start offering beer and wine, there will be an associate checking identification,” an Amazon spokesperson wrote Recode in an email.

Do you believe in zecond chances? MillerCoors does. The global beer giant is reviving Zima, the once-dead malt beverage known as “zomething different.”

Crain’s confirmed that the clear, citrus-flavored beverage, first introduced in 1993 and discontinued in the U.S. in 2008, is getting a second life — thanks in part due to the success of the alcoholic beverage giant’s Henry’s Hard Soda line.

“If you’re one of the zillion fans who have missed Zima, the answer should be clear,” MillerCoors said in a statement.

Zima, which clocks in at 4.7 percent ABV, is expected to be on store shelves at some point in 2017. It remains popular in Japanese night clubs.

As of Monday, Brewdog’s long-awaited U.S. brewery and taproom is open to the public, the Scottish beer makers announced on their blog.

Here’s what to expect: The taproom, dubbed DogTap Columbus, will serve 12 draft beers (and soon, 24) from Brewdog and other craft breweries in the Columbus area and beyond.

“To celebrate the doors opening we have air-freighted fresh BrewDog beer direct from our kegging line in Scotland to give our new neighbours the ultimate chance to find out what we are about,” the blog post reads.

The San Diego Union Tribune is reporting that Carlsbad’s On The Tracks has closed after five years and that Poway’s Lightning will be next if owner Jim Crute isn’t able to sell his brewery.

Crute reportedly blamed Lightning’s woes on Stone Distributing ending its agreement to distribute his German-style beers, as well as the lack of foot traffic by his business.

“You can be a small brewery nowadays,” Crute told the paper, “but you have to be really focused on sales that go directly to the public.”

Speaking of Stone, CEO Dominic Engels told the newspaper that laying off 5 percent of the company’s workforce — about 60 people — was a “one-time correction.”

“We had never done something like that before, nor do we intend to do it again,” Engels told the outlet.

Guinness drinkers know the ‘stache. It’s the foamy remnants of that first sip of the iconic Irish stout. Just in time for St. Patrick’s Day, that mustache can help benefit nonprofits through the Guinness Gives Back Fund.

Through March 19, the Irish brewer will donate $1 — up to $100,000 — to its charitable wing every time users tag @GuinnessUS and use the hashtag #StacheForCharity when posting a selfie of themselves sporting a ‘stache on social media.

“Let’s face it, now’s as good a time as any to raise a pint,” Guinness Brand Director Emma Giles said in a press release. “We need to reconnect with what can bring us together as family, friends, coworkers, Americans, and most basically, human beings. St. Patrick’s Day is almost here and few, if any, holidays are as unifying or as celebratory.”

Growler Chill claims to have solved growlers’ “perishability problem.” And 1,658 people (and counting) believe in the product’s solution for extending the life of the glass 32- and 64-ounce take-home containers, investing more than $600,000 — more than tripling its $175,000 original goal — in the start-up’s Kickstarter campaign.

So what is Growler Chill? It’s a household counter tap system that keeps up to three growlers “cold and fresh” by creating keg-like conditions.

“The response from the public and breweries, who have purchased Growler Chills and helped us share our story, has been tremendous,” Growler Chill inventor Randy Hollister said in a press release. “The performance of our Kickstarter program has proven the market demand for a counter tap that allows consumers to keep craft beer cold and on-tap at their house.” 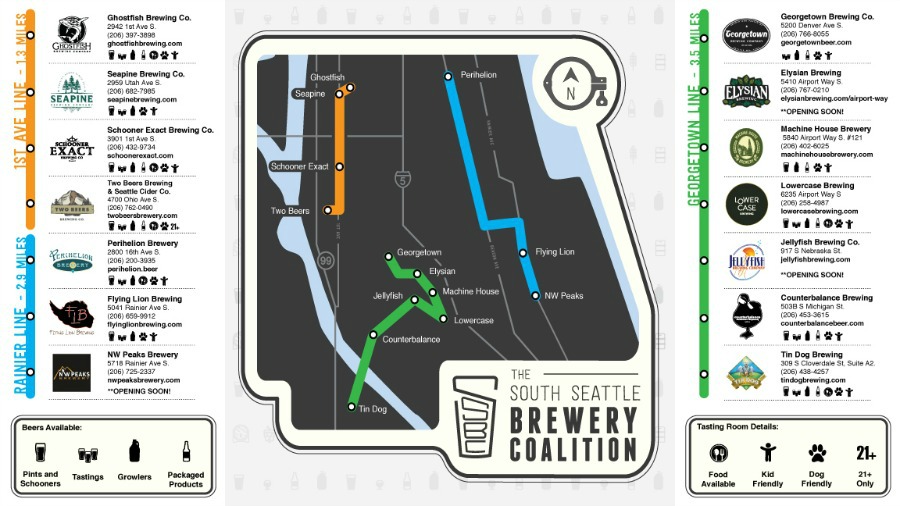 “One of the things that makes the Seattle beer community so incredible is a dedication to supporting one another,” Dan Armerding, tasting room lead at Two Beers Brewing Co., said in a press release. “South Seattle offers something for everyone, and our goal is to spread the love and give you an excuse to drink someone else’s beer.”

Here are the suggested routes: