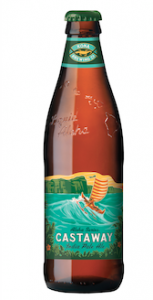 Kailua-Kona, Big Island of Hawaii — Kona Brewing Company has announced that Castaway IPA, a longtime local favorite at Hawaii pubs and restaurants, will be coming ashore to the U.S. mainland beginning April 14, 2014. The Hawaiian-style IPA will be available in 12oz bottles and on draught in major Kona markets across the U.S.

Said Kona Brewmaster Billy Smith: “IPAs are one of the fastest-growing segments in today’s craft beer industry, and we think mainland craft beer lovers will appreciate how distinctive Castaway is from many current IPA offerings. The citrus, tropical and mango influences combine with what you’d expect from a typical IPA to create a drinking experience that takes you back to the islands.”