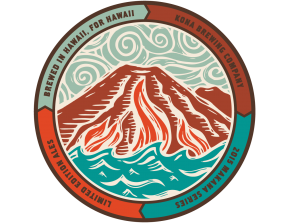 Kailua-Kona, Big Island of Hawaii— Kona Brewing Company has announced it is celebrating its 21st birthday in a very Hawaiian way – by giving back to those who made them the success they are today. After months of discussion about how to best say mahalo to the people of Hawaii, the employees of Kona Brewing determined that the most fitting way was to create a special series of small-batch beers that would only be available in its island home.  This new island-only series of beers, called the Makana Series, (which means “to give”) serves as the centerpiece for Kona Brewing Co.’s full year campaign to raise money for non-profit organizations who dedicate themselves to restoring and preserving Hawaii’s natural resources.

”We are so proud that we can bring together the two things Kona Brewing Co. does best, making great beer and giving back to the community.” said Kona Brewing Company brand manager Aaron Marion. “We couldn’t think of a better way to celebrate our 21st birthday than to say mahalo to those that work towards the greater good of our island home.” 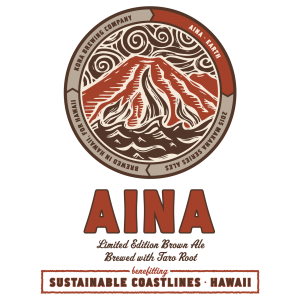 Inspired by the four elements of nature, (Earth, Fire, Water, and Wind) the Makana Series pays homage to the forces that helped shape Hawaii into the dynamic and beautiful place the brewery is proud to call home. Each of the four beers in the series is not only inspired by one of these four elements, but actually incorporate local Hawaiian ingredients derived from the elements themselves. And as a fitting way to link the series of beer to the four non-profit organizations, Kona Brewing Co. carefully selected non-profit partners whose focus is to restore and protect Hawaii’s natural beauty.

The first release in the series, Aina Brown Ale, pays tribute to the earth by incorporating Kalo (taro root) into the brewing process.  A beer inspired by the earth deserves a non-profit partner who is equally tied to the earth, which makes Sustainable Coastlines Hawaii the perfect partner and worthy recipient of a portion of the proceeds raised from the sale of this limited-edition beer.

THE 21st BIRTHDAY PARTY … LAUNCHING THE MAKANA SERIES IN STYLE

Aina Brown Ale will make its official debut at the Kona Brewhouse Oasis on Jan. 24 with a concert featuring The Green, a wildly popular Oahu-based reggae band, who will be headlining the main show, and Gomega, a Maui-based band with ties to David Bell, one of the two local Hawaiian actors who star in Kona’s TV commercials. A blessing and Hawaiian oli will be shared before the show and will be led by Blake “Brutus” La Benz, the other local Hawaiian actor that stars in Kona Brewing Co.’s TV commercials

The doors of the Brewhouse Oasis will open its doors to the public at 5:45 p.m., and the opening band, Gomega, will take the stage 6:30 p.m. After a short intermission, The Green will take the stage around 8:00 p.m. Prior to general admission there will be two pre-show events for invite-only guests of the brewery. The first is a media only gathering from 4-5 p.m. that includes a brewery tour with brewmaster Billy Smith and a Q&A session where any questions will be answered by the brewers and other KBC representatives. From 5-11 p.m. there will be a “Makana Ohana” event at the Kona pub where Sustainable Coastlines Hawaii, the non-profit partner for Aina Brown Ale, the media, industry partners, and other friends of Kona Brewing Co. will gather to celebrate the beer launch with special food pairings and one-of-a-kind keg tappings.  In order to facilitate the 5-11 p.m. Makana Ohana event, the Kona Pub will be closed for the full day of Jan 24th and no access to the pub or bar will be available for the general public. The Koko Marina pub located in Hawai-Kai will remain open on Jan 24th and there will be no service interruptions. 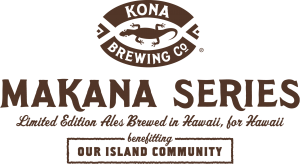 The next three Makana Series launch parties (April, July, and October) have not been finalized and more information will be made available about the date, time, and location for these events early in 2015.

WHERE TO FIND THE MAKANA SERIES:

Each of Kona Brewing Co.’s four new Makana Series beers will be available for approximately three months, (or until supply runs out) and will be available on draft-only. Aina Brown Ale will be available to bars, restaurants, and the Koko pub beginning Jan. 26 – the Monday after the launch party. Distribution of each beer will be limited to the two KBC pubs and approximately 50 other bars and restaurants throughout Hawaii. Due to limited supply, the series will not be available at the growler station or for dock sales at the Kona brewery or Koko Marina pub.

“It’s kind of interesting if you think about it. The cliché is that most people celebrate their 21st birthday by focusing on themselves, yet our Kona Brewing Co. Ohana is throwing a year-long birthday party to celebrate those around us. I think I speak for the all of us here at the brewery when I say that the Makana Series, and the spirit of giving that rests at its core, is probably the best gift we could give to the people of Hawaii.”

For more information on Kona Brewing Company and its award-winning craft beers is available on the company’s website.